What to see: Santander - Gijón

The Camino de Santiago from Santander transits between the sea and the mountains, of great monumental beauty, in which the Jacobean tradition has left its mark, throughout history, the green of its valleys and the many rivers that mark it , as well as its accentuated cultural, seafaring, gastronomic and livestock traditions, are another of the main arguments for touring this route of the Way of Santiago del Norte. Of rugged terrain, although not too demanding. The itinerary takes place in a very pleasant environment, predominantly rural, dotted with numerous wooded areas and water courses, ending the stages in beautiful cities full of history.
Santander Stage - Mogro

In Santander, the Gothic Cathedral stands out. Inside we can see the Crypt of Christ as well as the Altarpiece and the Gothic Cloister. The Church of the Annunciation. The Palacio de la Magdalena, which was a gift from the town of Santander to the King and is currently the scene of numerous activities of the Menéndez Pelayo University. The Menéndez Pelayo Library, Historic Artistic Monument and La Plaza Porticada, in Herreriano style.

In Santillana del Mar we contemplate the Collegiate Church of Santa Juliana S. XII. The most representative medieval buildings are: Torres del Merino and Don Borja; as well as the Gothic tower and the Renaissance Palace of the Velarde. On the other hand, the House of big men named after the giants who escort his shield.

In Cobreces, the Via Coeli neo-Gothic Monastery of the late XNUMXth century and the neo-Romanesque church of San Pedro ad vinc.

You cannot stop visiting Comillas the whim of Gaudí, one of the most unique works of Spanish modernism, summer cottage built in 1885. In the French Camino de Santiago in Astorga we will be able to see another culminating work of Gaudi, the episcopal palace.

Tour the Old Town Hall square and observe the different Mansions such as the Palace of Sobrellano and the Palace of Duke Almodovar del Río.

Make a visit to the San Cristobal Cemetery.

In San Vicente de la Barquera we highlight the Maza bridge, the Town Hall and the S.XVI Castle.

The highest place of the population corresponds to the Church Santa María de los Ángeles, of gothic style and of S. XIII.

In Colombres, the Quinta de Guadalupe and the Archivo de Indianos stand out.

On the other hand, in Llanes stands the Church of Santa María del Conceyu, started in 1240. In its immediate surroundings is the Casa Cercau from the XNUMXth century, the Casa Posada Herrera, as well as the ruined Palacio Duques Estrada

Finally you can contemplate the Casa San Roman and the Gaztañaga Palace.

In Nueva we appreciate the modernist Villaconcha and the Palacio Conde de la Vega del Sella.

From Ribadesella, its City Hall and it is highly recommended to take a walk along Mount Corberu and the caves of Tito Bustillo, one of the Sanctuaries of Cantabrian Paleolithic art.

In Colunga we can visit the San Cristobal el Real Church of the XNUMXth century and its tower on the facade.

Other attractions of the town are the Casa Comercio de los Pablo and the Casona de los Covian, dating from the XNUMXth century.

Finally, the Chapel of Our Lady of Loreto, founded in 1633 by an Italian shipwreck.

In Priesca the Temple of the Savior that was consecrated in the year 921, belongs to the final phase of the Asturian pre-Romanesque.

In Villaviciosa, the Casa de Hevia from the XNUMXth century stands out. The Church of S. María de la Oliva, dates from the XIII century, in Gothic style.

If we take a tour of its streets we can admire numerous houses and palaces from the XNUMXth century.

Between Villaviciosa and the village of Casquita we find the Church of S. Juan Bautista, in Amandi, one of the best buildings of the Asturian Romanesque.

In Gijón it is worth taking a walk along the beach of S. Lorenzo.

The birthplace of Jovellanos. 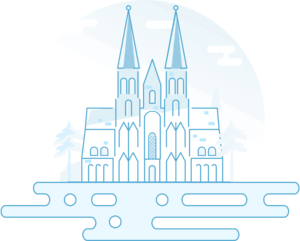 Portuguese Way
Tui - Santiago
7 days / 6 nights
420 € / person
Show all
Hide all
We use our own and third party cookies to improve the user experience through your browsing. If you continue browsing you accept its use. To see more information, see our cookies policy.OKCookies Policy