It is less than a week before the date you have chosen. To expedite the process, we suggest that once you finish the reservation you can contact us by phone at the number +34 91 221 74 85 or by email at [email protected].

El Camino de Santiago from Roncesvalles a Logroño represents the Beginning of Camino in French in Spain, at the foot of the Navarrese Pyrenees. Route of extraordinary culture, traditions and monuments that mark it, many of them intimate witnesses of the Jacobean Route.

Route of marked contrasts, from the Pyrenees, with its beautiful forests, to the streets-villages that were built by and for the Camino, until reaching the farmlands and vineyards of La Rioja.

IMPORTANT!!  Unlike other companies OUR RATE INCLUDES TRAVEL INSURANCE AND VEHICLE ASSISTANCE IN CASE OF EMERGENCY, for your safety and peace of mind.

Remember that in Mundiplus we adapt the kilometers of the stages of the Camino de Santiago from Roncesvalles according to your needs. You can travel alone, or in a group of friends and / or family.

NO CANCELLATION FEES FOR COVID !!

This emblematic stage passes through a low mountain area in the shade of numerous forests, which does not pose any more difficulty than the Altos de Erro and Mezquiriz. It crosses the towns of Burguete, with its “four-sided” houses, and through the streams that circulate through its streets. Next, we come across Espinal, another typical town-street on the Camino.

Once we cross the Alto de Erro, we arrive at Zubiri, capital of the Esteribar Valley, the most populated place on the Camino de Santiago, north of Pamplona.

At this stage we can admire, among other monuments, the Collegiate Church of Roncesvalles, the Chapel of Sancti Spiritus or “Silo de Carlomagno”, the Gothic Cross of the XIV Century, at the exit of Roncesvalles, in Zubiri we will cross the “Puente de la Rabia”

The Song of Roldan had its origin in these lands, do not miss its history and monuments.

Arrival to Zubiri End of the stage Accommodation.

* NOTE: You can start the route in Saint Jean de Pied de Port

Saint Jean Pied de Port is France's last town on the border with Spain. Spectacular stage, which has its beginning in the beautiful French town, at the foot of the Pyrenees. Hard stage, but also mythical on the Camino, in which its extraordinary views will be its hallmark.

Through the Esteribar Valley, we reach Larrasoaña, through small agrarian villages.

We cross successively Irotz, Zabaldica, until we reach Trinidad de Arre, a beautiful complex of the Camino de Santiago in Navarra, formed by the Bridge over the Ulzama river. The Trinity was hospital, shelter and basilica.

From Burlada, you can already see Pamplona, ​​which we access by the Romanesque Magdalena Bridge and enter the city through the “Puerta de Francia”, crossing its wall.

We will admire the Cathedral of Pamplona, ​​the city walls, the Fortress Church of San Cernín, Ciudadela and Plaza del Castillo, among other monuments of interest.

Arrival to Pamplona. End of the stage Accommodation.

Don't forget to go out for Pintxos in the famous bars on Calle Estafeta – Not everything is walking pilgrim!
Day 4: Stage Pamplona-Puente la Reina (23,87 kms)
Difficulty: Easy Duration: 6h

After passing through Alto del Perdón, we will approach Puente la Reina, where pilgrims will meet at a crossroads with those from Somport and have followed the Aragonese route of the French Way.

In Alto del Perdón we will find the Pilgrim's Monument, one of the most significant pictures of the route.

YOU KNOW In which Church of this Camino de Santiago from Roncesvalles do you have to go three times before entering? After Obanos, an unavoidable visit is the Templar Church of Our Lady of Eunate, with an octagonal plan

Before reaching Puente la Reina, you pass one of the most important Romanesque jewels: Church of Santa María de Eunate. It is believed that it was built in the middle of the XNUMXth century, with an octagonal plan and its belonging to the Order of the Temple is attributed. Tradition says that before accessing its interior, it must be turned three times and finally placed under the vault to charge with energy.

In Puente la Reina, highlights the majestic Bridge over the Arga River, the Church of the Crucifix and the Church of Santiago, inside which is the famous carving of "Santiago Beltza"

Arrival at Puente la Reina. End of the stage Accommodation.

Stage that runs without difficulty, through farmland and vineyard area.

We leave Puente la Reina, crossing its magnificent bridge and arrive at Cirauqui, where we can see the Romanesque Church of San Román and at the exit of the town, remains of the old Roman road with its one-eyed bridge.

After crossing Lorca and Villatuerta successively, we reach Estella.

Arrival in Estella. End of the stage Accommodation.

Like the previous stage, the land we will find is of similar orography.

We will leave Estella, channeled by the Montejurra and the Monjardin Peak.

We will arrive at Iratxe, where the first pilgrims' hospital was located, which dates back to 958. We can also enjoy the Wine Fountain, installed by Bodegas Irache.

In Monjardin, its castle stands out, which crowns the mountain. At the entrance of the town, we can see the "Fountain of Moors"

In Los Arcos, we highlight the porticoed Plaza de Santa María with its Romanesque church, as well as the Puerta de Castilla built in the XNUMXth century.

Arrival to Los Arcos. End of the stage Accommodation.

Next, there is the spectacular Viana, located on a high, which highlights its well preserved wall.

In its urban area, mention the Churches of Santa María from the XII century and San Pedro.

We enter Logroño, through the great bridge over the Ebro river.

In Logroño, we highlight the Church of Santiago el Real, with its famous Santiago Matamoros in the portico, the Co-Cathedral, with a famous Altarpiece by Miguel Angel and the Plaza de la Oca.

Arrival in Logroño. Accommodation. End of the stage and of our Camino de Santiago from Roncesvalles.

If you have more days you can extend your Camino de Santiago from Logroño.

Reviews
Sat
Nothing was overlooked

Incredible and unique experience from Roncesvalles. Beautiful landscapes The services provided were perfect. Thank you Mundiplus for your help. We enjoy the pilgrimage and we hope to do another route in 2017.
Maria Mercedes Garcia
Spain
On the way time stands still

Many people told me that it was an experience that had to be lived once in a lifetime that was unique and unrepeatable. And I thought they were exaggerating, but when you are on the Camino, day-to-day experiences make you believe that you are in a new world, everything flows more slowly, other people's rhythms, without stress, nerves, living every moment and enjoying it to the fullest. , something that I had already forgotten in my routine. DO IT AND LIVE IT!
Sandra, Nuria, Raul and Carlos
Spain
From Saint Jean Piede de Port

We decided to start from Saint Jean Pied to Roncesvalles. This medieval town is beautiful and the first stage has spectacular landscapes. It is quite physically demanding, but from the heights and seeing the valleys between France and Spain you forget your tiredness. 100% recommendable. Good way to all.
Osvaldo, Elida and Zacarias
Spain
Whole french way

Already back from our Camino de Santiago from Roncesvalles, we congratulate you for your good work. Managements and services perfectly orchestrated and conducted by you. Bike experience throughout the French Way positive and enriching on a personal level. The return to the routine becomes arduous after the relaxation that is experienced on the road. Thanks Mundiplus.
Jesus Maria
Spain
Total success

Our trip with you has been a total success. We have been delighted with the organization, accommodations, in short, with everything. We have really enjoyed the experience so next year we have thought, if God wants, to continue with you the next stage of Logroño to Burgos. Of course we are going to recommend to all our friends and family who want to live the way they come to you. Keep it up please! The pilgrims of Santiago need you!
Aurora
Spain
Gratitude

I want to express our satisfaction for the service received, it has been a perfectly organized and structured trip and we have always had the feeling of having you nearby.

Perfect choice of accommodations, they have treated us great and we have had a wonderful dinner, everything has gone great, I thank you for the deal when you hire and during my way.
Marga and Leopold
Spain
Repeating the Way

After the success of our first Way, we made the last 100 km as a contact and see if we liked the road and this year we have started from the beginning in Roncesvalles. They are 2 different routes and that is what we have not liked, so we are always surprised at the new. We will continue another year to complete it!
Hope and Eve
Spain
Little by little to Santiago

It seems a lie, but on February 11, we started our journey in Saint Jean. This first stage we will go to Pamplona. 4 days. We will resume it, a couple of months later, work and family rule, and so on until we reach the end. We do not want to go on the Way, we want to enter it, so we go slowly, starting the stages. What emotion, what desire we have. 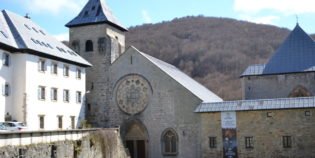 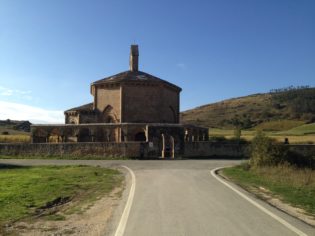 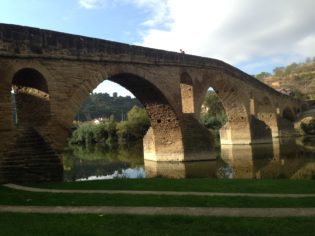 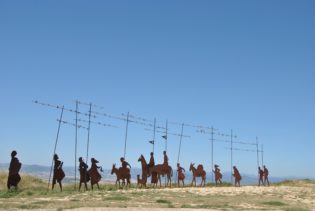 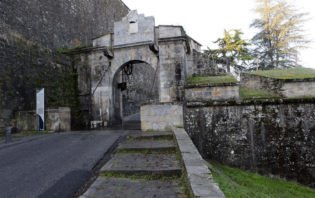 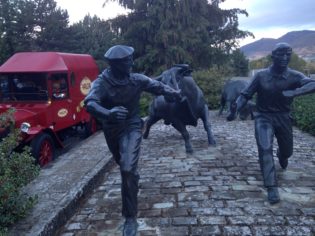 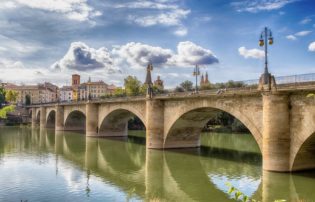 We use our own and third party cookies to improve the user experience through your browsing. If you continue browsing you accept its use. To see more information, see our cookies policy.I AcceptCookies Policy