In Camino de Santiago from Irún a Bilbao alternates coastal area with mountains. The city of Irún is the starting point of the Northern Way. Rich and copious gastronomy as well as its famous restaurants and chefs await us on the route. Lush landscapes and spectacular views will accompany the pilgrim through Basque lands.

Irun
Saint Sebastian
Zarauz
I must
Markin
Gernika
Bilbao
IMPORTANT!!  Unlike other companies OUR RATE INCLUDES TRAVEL INSURANCE, for your safety and peace of mind.
We prepare this Camino del Norte route for people traveling alone, as well as for groups of friends and / or family.
Special discounts for groups of at least 6 people: €15/person. (Not combinable with other discounts)

Breakfast and start of the stage of our Camino de Santiago from Irun.

Stage that runs between the coast and the mountains. Once arrived at the Sanctuary of Our Lady of Guadalupe, we will go down the slopes of Mount Jaizkibel, through tracks and trees. We will arrive at Pasajes de San Juan, where we will cross the estuary to Pasajes de San Pedro, by boat.

The entrance to San Sebastián will give us some beautiful views of the bay of San Sebastián. For lovers of good food as we pass through the city of San Sebastian within a radius of 25 kilometers, 18 Michelin stars are concentrated. You can enjoy its excellent cuisine also with its famous pintxos.

Arrival in San Sebastian. End of the stage

The exit from the city will offer us magnificent views from Monte Igeldo, which we will access, as soon as the stage begins.

Similar to the previous stage, with wooded areas and dirt tracks, in most of the route.

Orio, a seaside town par excellence, is the place prior to our arrival in Zarautz.

Arrival to Zarautz. End of the stage

Stage that runs very close to the sea, halfway up the hill and with constant ups and downs.

Magnificent views and important fishing villages, such as Guetaria, and Zumaia, we will meet until we reach Deba.

Arrival to Deba. End of the stage

Stage with absence of population centers and a multitude of typical farmhouses and large areas of trees, will accompany us throughout the route.

We highlight Calvario de Maia and the Caserio de Kostolamendi area, as the maximum altitude of the stage.

Arrive in Markina. End of the stage

Many rural towns, some with history, such as Bolibar, mark this stage, which runs through land similar to the previous stage, with some medieval road, such as the one that gives access to the Collegiate Church of Ziortza and with the final surprise, before reaching Gernika, having entered the Urdabai Biosphere Reserve.

Arrival to Guernika. End of the stage

Stage with two faces, like all those that end in large population centers. Half of it, offers us the bucolic and rural environment, of our entire route, since we started our Camino in Irún, and the rest we find the industrial development, typical of the big cities.

For those people with little physical preparation or who prefer to perform the stage in a more calm and relaxed way, it would be advisable to divide the stage into two days:

Stage from Guernika to Lezama (20,7 Kms)

Day 8: Breakfast-End of our services 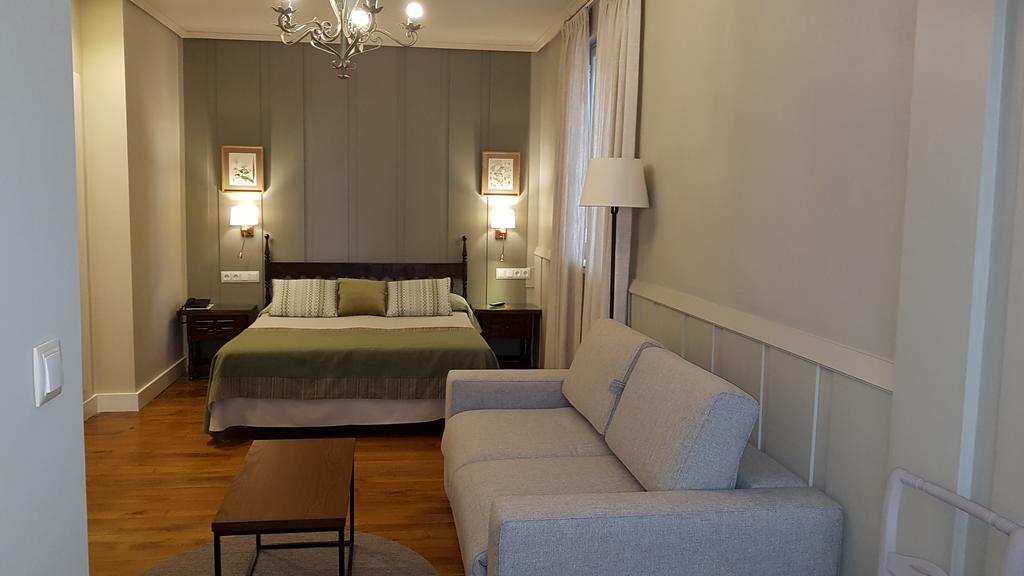 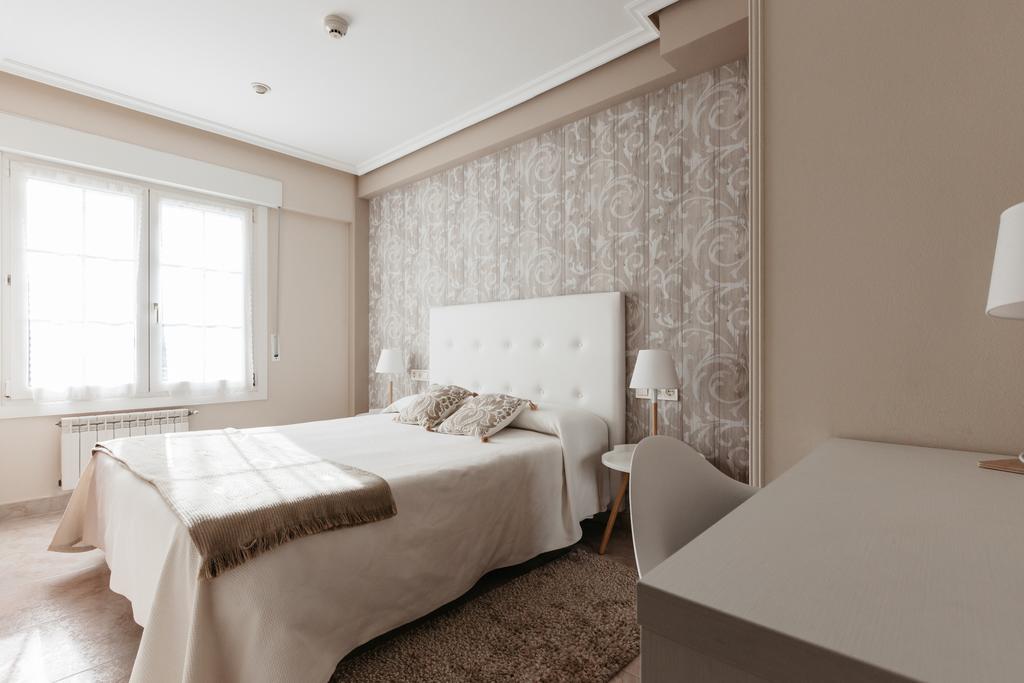 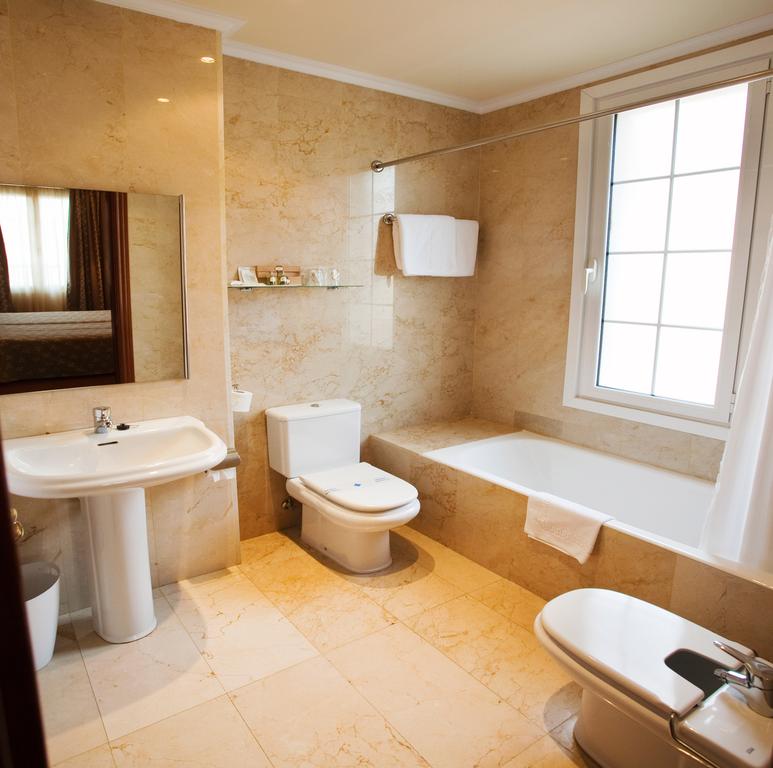 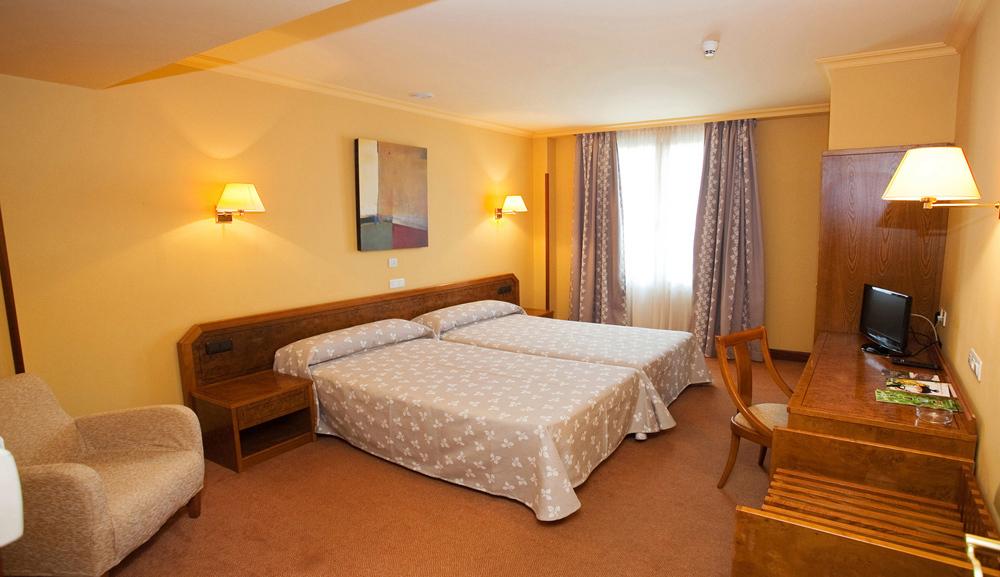 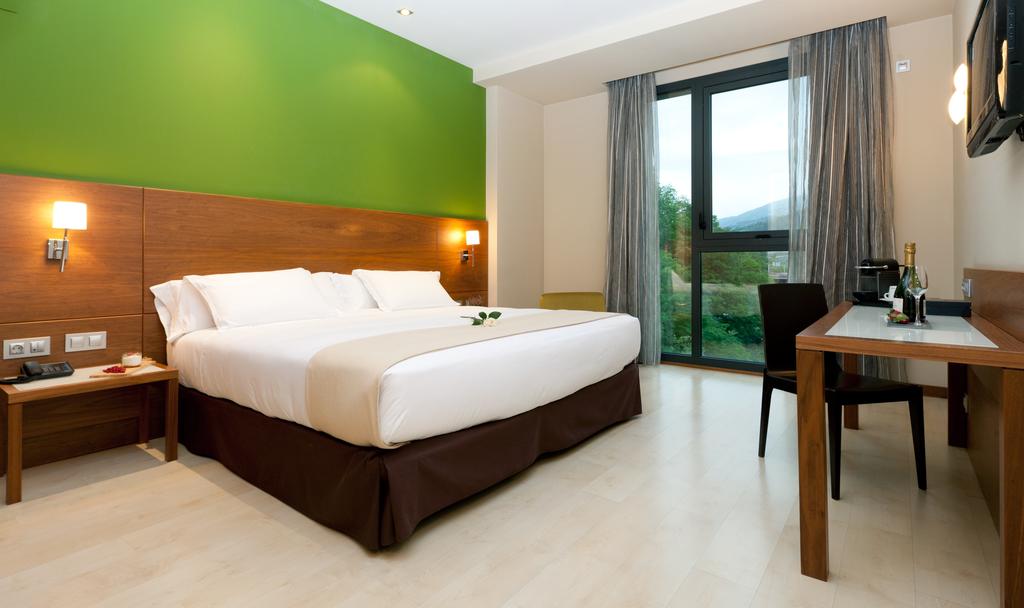 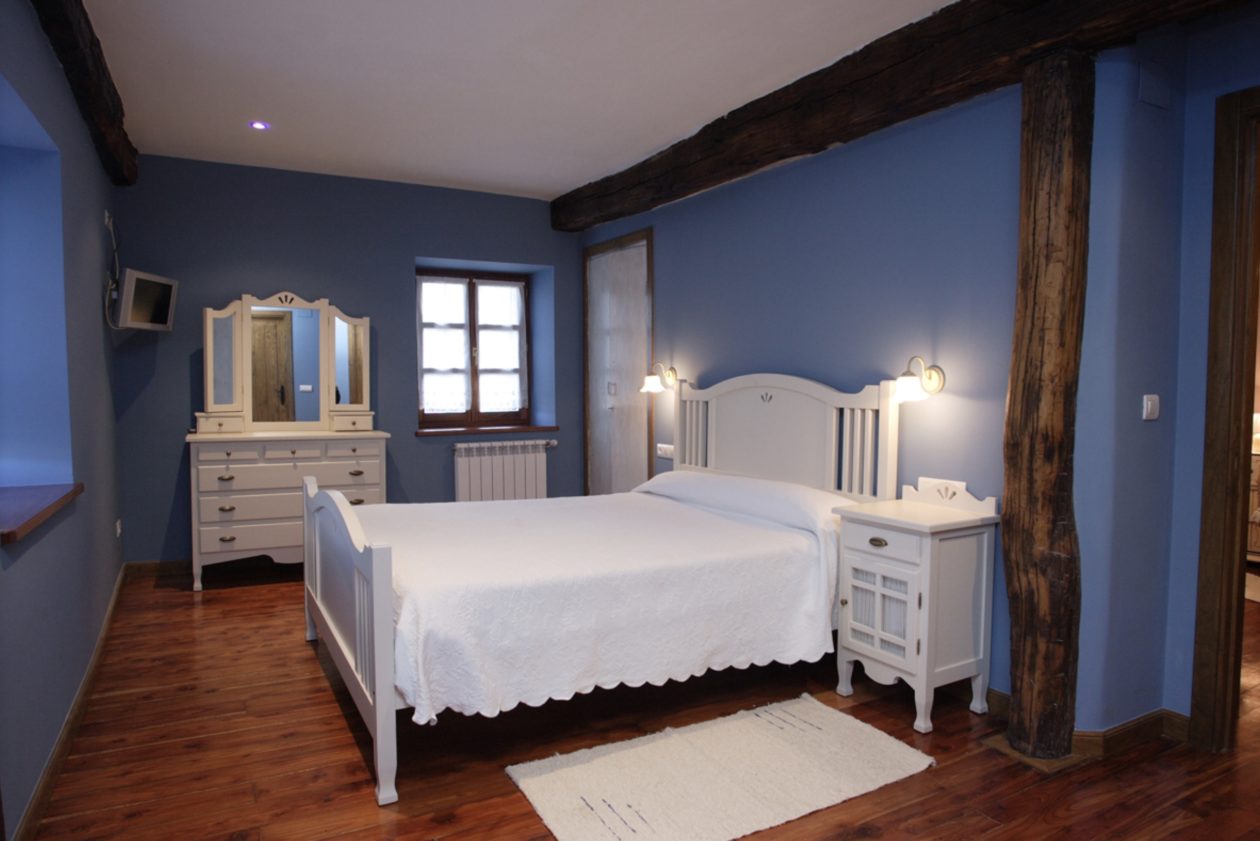 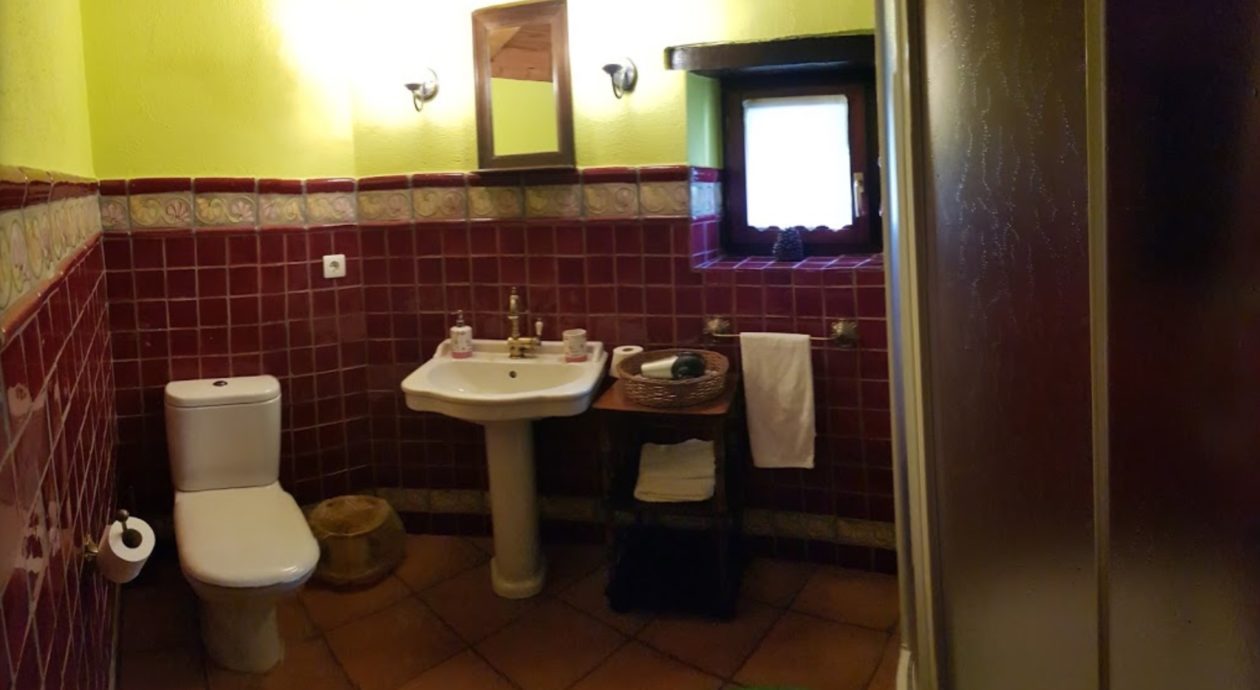 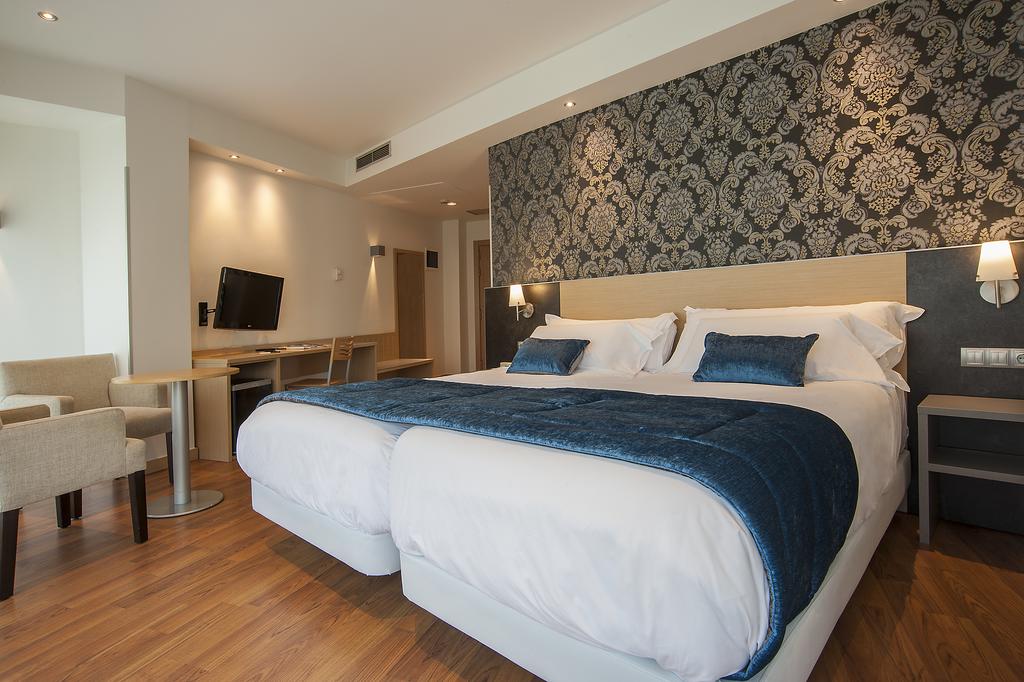 STAGE FROM IRUN TO BILBAO

In Irún, the Church of Santa María del Juncal stands out, which dates from the XNUMXth century and the Hermitage of Santa Elena, where the remains of a Roman temple from the XNUMXst century are found.

Walking through its streets we find its Baroque-style Town Hall, from the XNUMXth century.

In the square we find the column of San Juan de Harria.

Fuenterrabia stands out for its medieval essence. We can walk its narrow cobbled and walled streets admiring, for example, the Plaza del Obispo, the Casadevante Palace and the Plaza de de Guipuzcoa.

Leaving the walled part of the city is the powder keg from the XNUMXth century.

STAGE FROM SAN SEBASTIAN TO ZARAUTZ

Touring the bay of La Concha, we will leave on our left the Miramar Palace.

In the old town we will meet the Basilica of Santa Maria. Opposite is the Cathedral of the Good Shepherd. Also in the old town is the San Telmo Museum. The old Town Hall stands out in the Plaza de la Constitución.

In the Ribera del Urumea, outside the old part, stands the Hotel Maria Cristina and the Victoria Eugenia theatre, close to the Kursaal, a famous building by the architect Moneo.

From Monte Igueldo, where the hotel is located, we can enjoy spectacular views of San Sebastián.

Before arriving in Orio, we find the Hermitage of San Martin de Tours, patron of the pilgrims.

In Orio, the Church of San Nicolas stands out.

In Zarautz, the Church of Santa María la Real stands out, inside which you can see a Gothic image of the Virgin and the “pilgrim's tomb”. Attached to the Church is the Torre de los Zarautz. At the end of the promenade is the Palacio de Narros.

In Guetaria the monument to Juan Sebastian Elcano.

The Church of El Salvador, Gothic from the XNUMXth century. The promontory mount of San Anton “Ratón de Guetaria”

In Zumaia, highlight the Church of San Pedro XII century.

In Itziar, its Plateresque Church stands out, inside which is the image of the Virgin with the child, from the XNUMXth century. Sailors have offered themselves to it since ancient times, and as proof there remains a votive offering hanging from the nave.

In Deba we can appreciate the parish church of Our Lady of the Assumption, in which its cover stands out. We also find the Ekain caves, famous for their cave paintings.

In Markina, the medieval towers stand out, such as Barroeta and Mugartegui.

STAGE FROM MARKINA TO GUERNIKA

In Bolibar we find the Church of Santo Tomás (XNUMXth century) and the Casa Bolibar - Jauregui (XNUMXth century). From this town the cobbled road leads to the Collegiate Church of Cenarruza. Next to its cover is a sepulcher decorated with a Santiago Matamoros.

In Arbaicegui we can see the porch, linked to Guerricaiz by a Renaissance bridge of great importance in the XNUMXth century, which has numerous tower-houses such as those of Jauregui or Bengolea.

In our what to see on the Camino De Santiago from Irún and of great importance we highlight the natural ecosystems of Urdaibai, declared a Biosphere Reserve by UNESCO.

STAGE FROM GUERNIKA TO BILBAO

In Mujica, the parish church of San Vicente, where a half-point window stands out in the north wall, clearly Romanesque in style, which makes it unique in these lands.

The Roman road on the road to Alto de Guerequiz.

In Larrabezu, the hermitage of San Salvador de Arechabalagana, where a monolithic stone window from the XNUMXth century stands out.

The Juradero Church of San Emeterio and San Celedonio, which contains in its interior one of the most important altarpieces of Biscay.

In Lezama the Humilladero de Santa Cruz. We can also contemplate the Church of Santa María XIII century.

We close our proposals on what to see in the section of the trip to the Camino de Santiago organized from Irún to Bilbao, with the latter city founded in 1300 as a medieval town by Don Diego López de Haro. The Basilica of Our Lady of Begoña and the Cathedral of Santiago, built around the XNUMXth century, stand out. The Church of San Antón Abaz, which together with the bridge at its feet, constitutes a symbol of Bilbao. The Guggenheim Museum of Contemporary Art. The Palaces of the Deputation and the Palace of Gómez de la Torre.

How to get to Irun

We indicate the different options of How to get to Northern Way starting in Irún.

Option 1: Private car and leave the vehicle parked in Irún. You can park in the vicinity of the accommodation where you stay. Another option is to request private parking.

Madrid> Irún with the company Alsa, with frequent departures from the Avda. de America Station in Madrid.

The closest airport to Irún is San Sebastian, approximately 5 minutes away by car.

- From here, by taxi to the accommodation in Irún.
Who walks the Camino from Irún

This Camino is highly sought after by foreign clients, since it passes through very famous and internationally renowned cities such as:

This path is a little more physically demanding than the most popular path and with flatter terrain than the popular and most traveled one. Way of Saint James from Sarria to Santiago. However, with a little physical preparation prior to the start of our trip; as well as the fantastic views will make it a more bearable Camino.

It is noted that this route is in the north. What a past of natural places, what panoramic. I had seen photos before arriving, but it is clear that a photo does not cover what the Human eye sees and especially what it feels like. Luxury accommodations, and food as always in the North can not put a BUT. Thanks to the Mundiplus Team for making the walk easier.
Mari Luz and Enrique Molina
Spain
You run out of words

I wanted to thank you in my name and that of my wife this trip to the Way that has left us an indelible mark. The trust placed in your agency has been more than returned. This route through northern Spain is incredible. Its people, landscapes, nature, gastronomy ... I count on you for another route in the future. 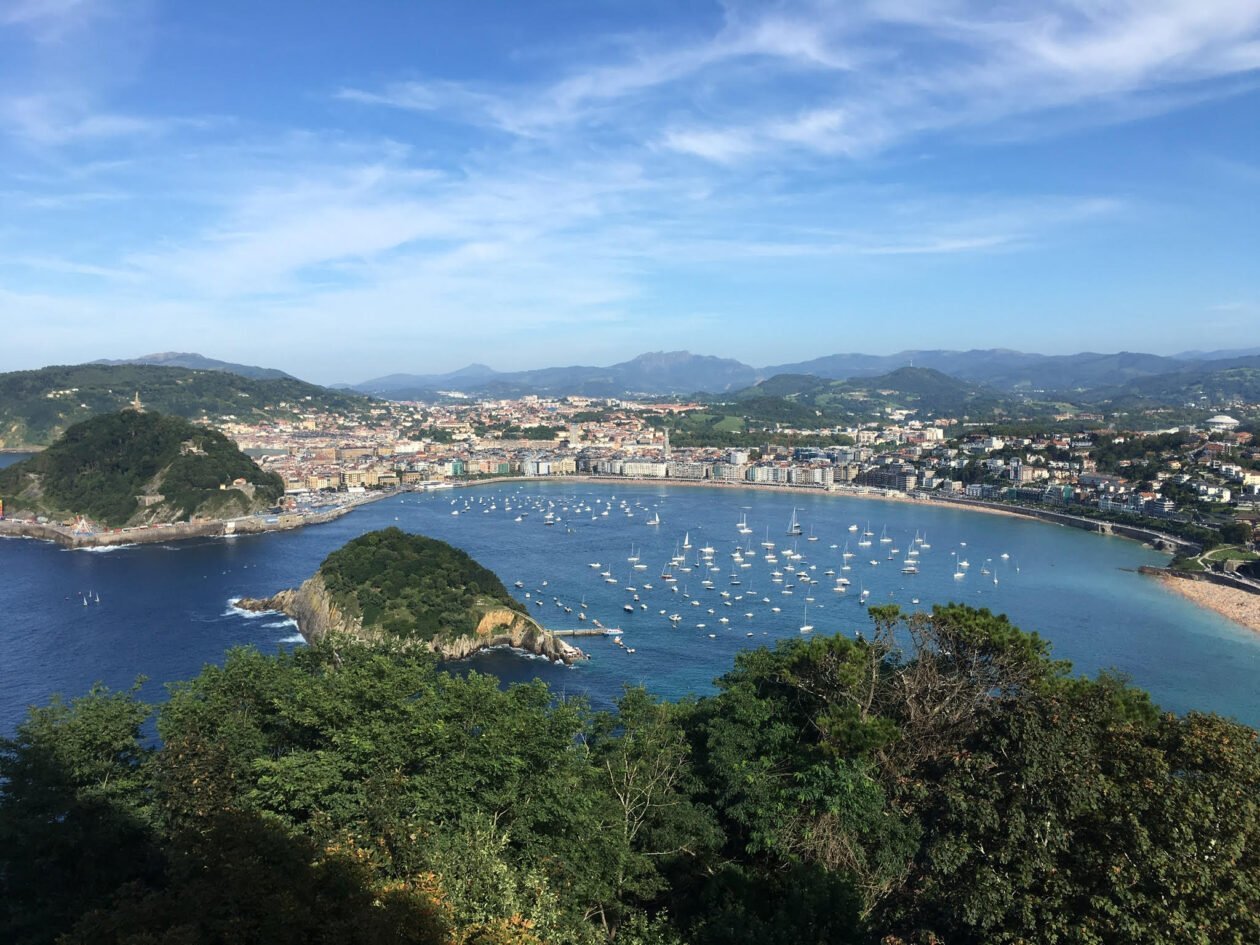 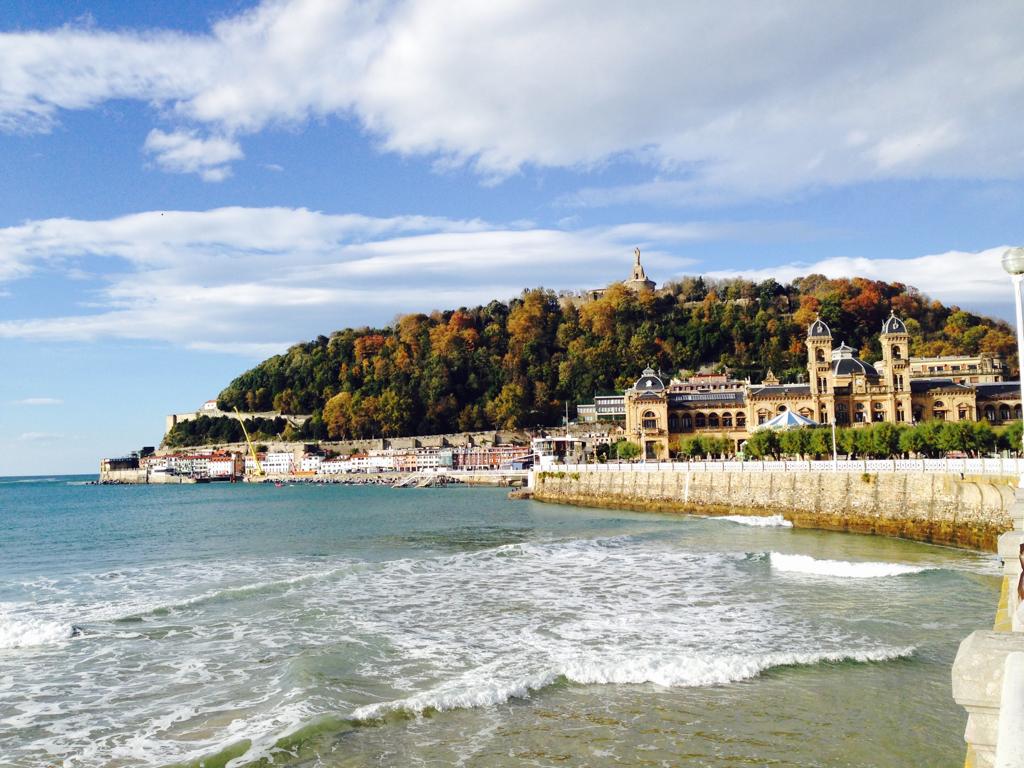 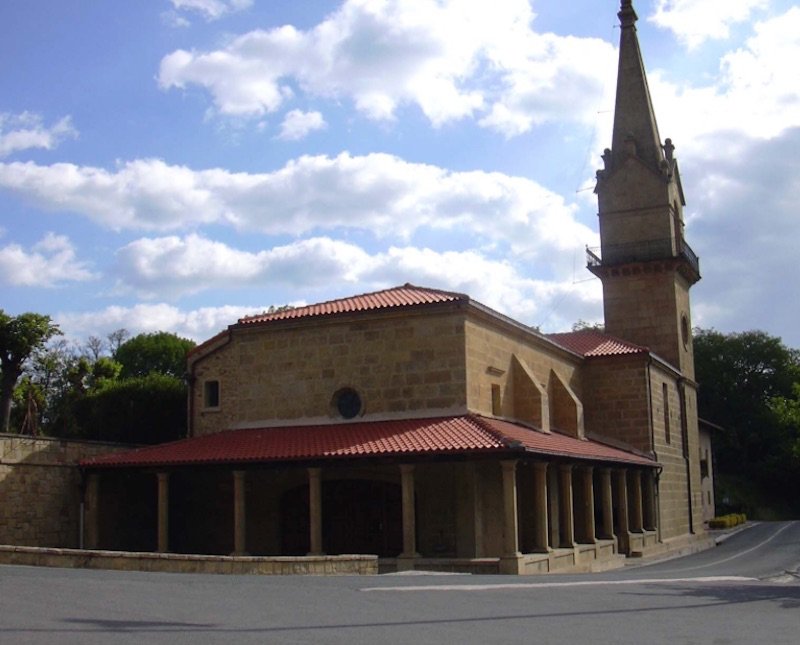 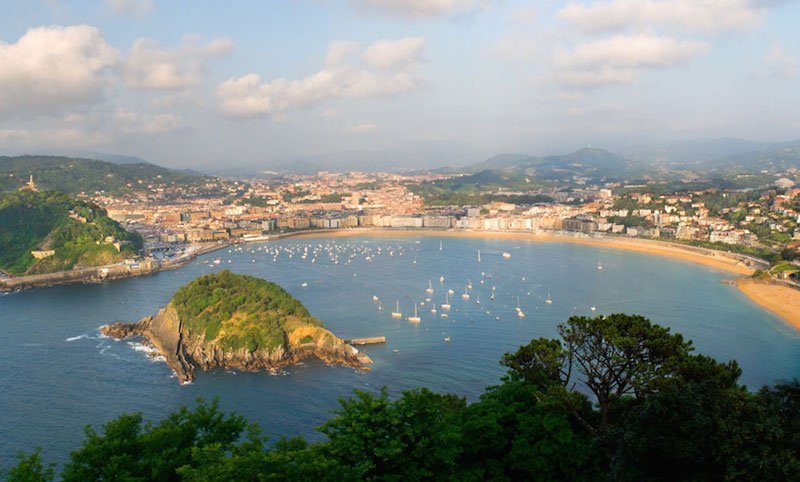 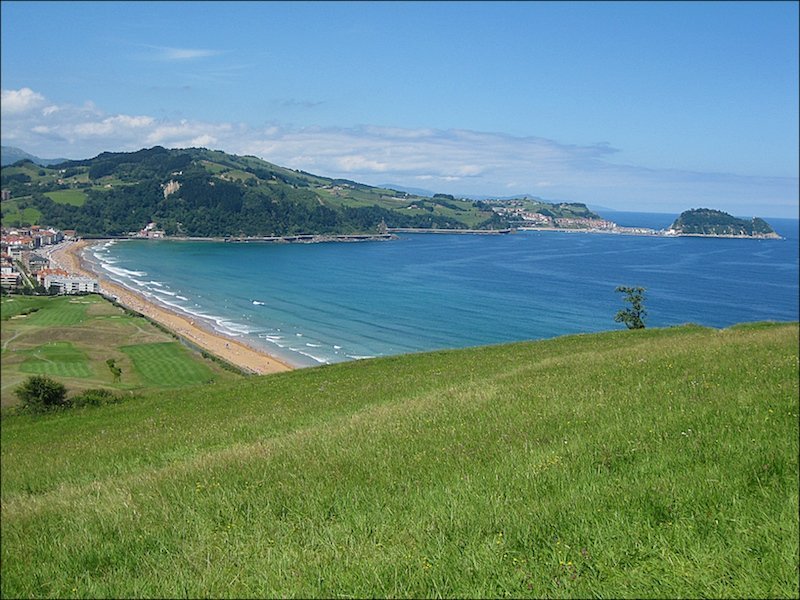 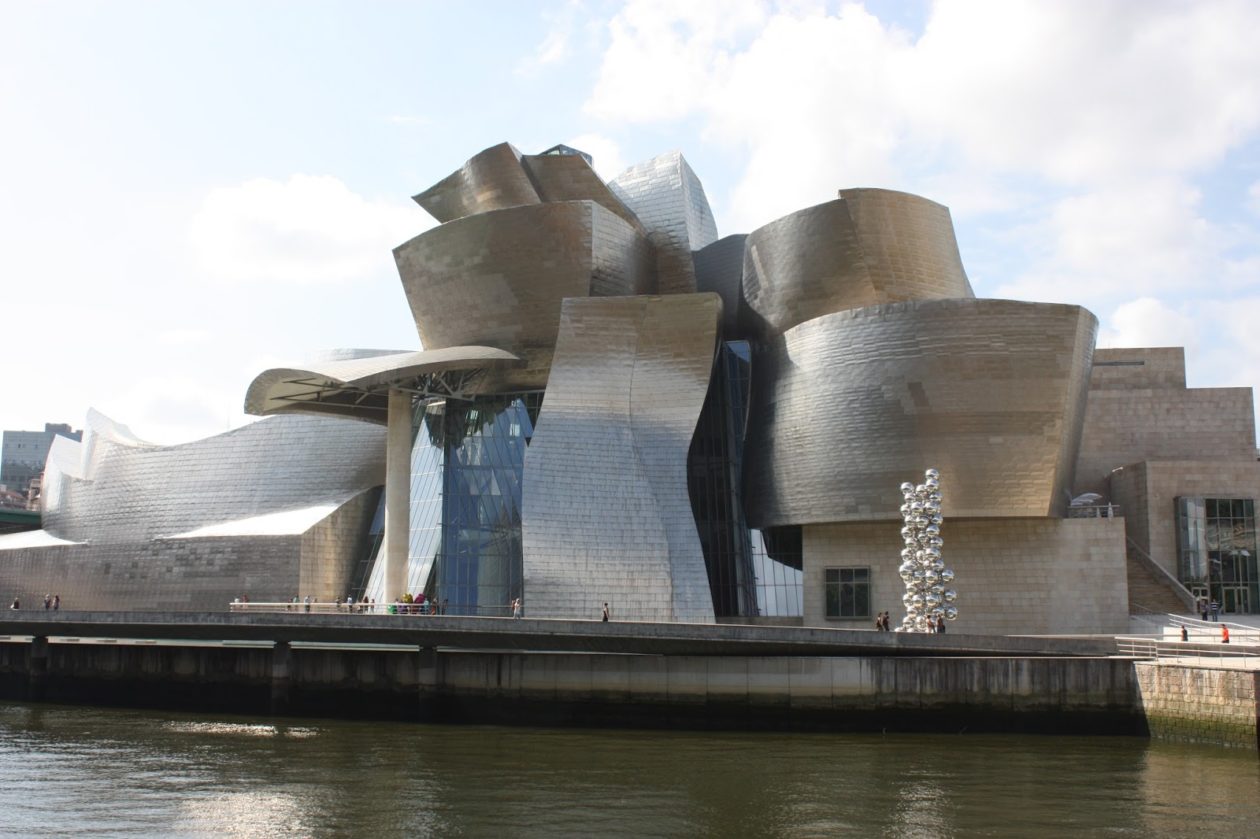