Song of Roldan and Roncesvalles

El Cantar de Roldán or Chanson de Roland, is an epic poem written in the XNUMXth century by the Norman monk Turoldo. It is the oldest Song of Deeds, written in Romance language that is preserved in the Oxford Library and that tells us the deed of Roldan (Charlemagne's nephew)

CARLOMAGNO AND THE CANTAR DE ROLDAN

History tells us that Charlemagne, King of the Franks, went to Zaragoza, which at that time was occupied by King Marsilio, to secure his Hispanic Brand, on the other side of the Pyrenees, not being able to finally take it after having besieged it for a month.

On his return to France, he gave command of the rear of the troops to his nephew Roldán along with the Twelve Peers of France (Frankish Noble Knights)

On August 15, 778, upon reaching the vicinity of Roncesvalles (Navarrese Pyrenees), according to other sources, it could be Valcarlos, they were ambushed by, apparently, thousands of Basques or Saracens or even both because it is not from the all accredited this fact, which produced the annihilation of the entire rear. Apparently, Roldán sounded the Olifant (ivory horn), to ask for help from Charlemagne who was in the vanguard of the troops, but Ganelón (Roldán's stepfather) betrayed him, because he made the King believe that it was not a sign of help so the help was delayed, not being able to arrive in time in his defense.

THE SWORD OF ROLDAN

His famous sword called (Durandarte or Durandal) is cited in the text of the Song of Roldan, which he tried to break by hitting it on a stone or, according to other versions, thrown into the water so that it would not fall into the power of the enemy, as well as the following words that Charlemagne cited, before the misfortune of his nephew "Dead is my nephew, the good Don Roldán, and I see something that I never saw so great: it was I who had to die and you save yourself" ... because if you are dead, France little OK" 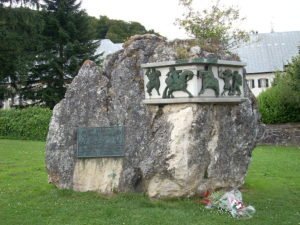 According to legend, in view of Ganelón's betrayal, he was executed. Roldán was buried in the Blaye Basilica, near Bordeaux.

The Cantar de Roldan or La Chanson de Roland was written three centuries after such events occurred, so it is to be believed that the facts have been largely distorted, both in the characters that appear in them and in the places mentioned, It was very common at this time to "accommodate" the events for the benefit of the causes that at that time in history were of interest, to instill courage in the population to help the conquest or reconquest of territories or to magnify Kings, Knights, Nobles, as well as indoctrination of the people.

As a reminder of these alleged events, in Roncesvalles (an iconic town on the Camino de Santiago Frances) is the Chapel of Sancti Spiritu, also called "Charlemagne's Silo", In which it was said that it had been the burial place of the Frankish Knights of this battle, a question that is impossible, since the battle in the Pyrenees dates from the year 778 and the date from which the famous Chapel dates is from the XNUMXth century, so the dates would dismantle the belief.

MONUMENT TO THE CANTAR DE ROLDAN

As a memory of the deed, in our Camino de Santiago from Roncesvalles, you can see in Alto de Ibañeta a monolith erected in 1965, although it lacks the sword and the maces with which it was erected as well as, at the entrance of Roncesvalles, there is another monument of such battle attached to a rock and a sculptural set of "Knight and horse" (in memory of the death of Roldán)

This Song of Roldan can be considered as a Myth, legend or even a distortion of what really happened in that battle in the vicinity of Roncesvalles, be that as it may be, there is no doubt that the Camino de Santiago houses many incredible stories forged over the centuries. All this will further enrich our trip to the Camino de Santiago.