El Cebrero (O Cebreiro), also known as Mons Februari or Mons Zaberrium, as it appeared in the old chronicles of the Camino de Santiago, a mythical and historical place in the imaginary pilgrimage, represents one of the most significant places on the itinerary of the French Way and more specifically from Camino de Santiago from O Cebreiro, along with the Pyrenees pass, from Saint Jean Pie de Port to Roncesvalles and the Ferro Cross (Lion)

O Cebreiro is undoubtedly one of the most representative destinations that pilgrims will find in this wonderful “personal epic”, among other reasons, due to its privileged location in the Ancares mountain range of Lugo. It is located at an altitude of 1293 meters, which places it in a unique location from which you can see the vastness of its green meadows, as well as exceptional views of the Leonese mountains.

Its importance is defined, mainly, by historical events that occurred in it, cradle of legends, unique architecture, such as its famous pallozas, of pre-Romanesque architecture, presumably Celtic, of which six of them are preserved that make it worthy of the title of Ensemble Historical Artistic and for the significant importance of being the first Galician town reached by the pilgrims who travel the French Way of Santiago.

In order to understand the reason for the importance and mythification of Cebrero that exists among pilgrims, in addition to what has already been stated, we must also highlight the hardness of the stage that ends in the Alto do Cebreiro, through towns such as Vega de Valcarce, Ruitelan, Las Herrerias, La Faba and Laguna de Castilla (the last Leonese town on this route, before ending in O Cebreiro), having very close to the end of their pilgrimage "only" 150 kilometers from Santiago de Compostela. 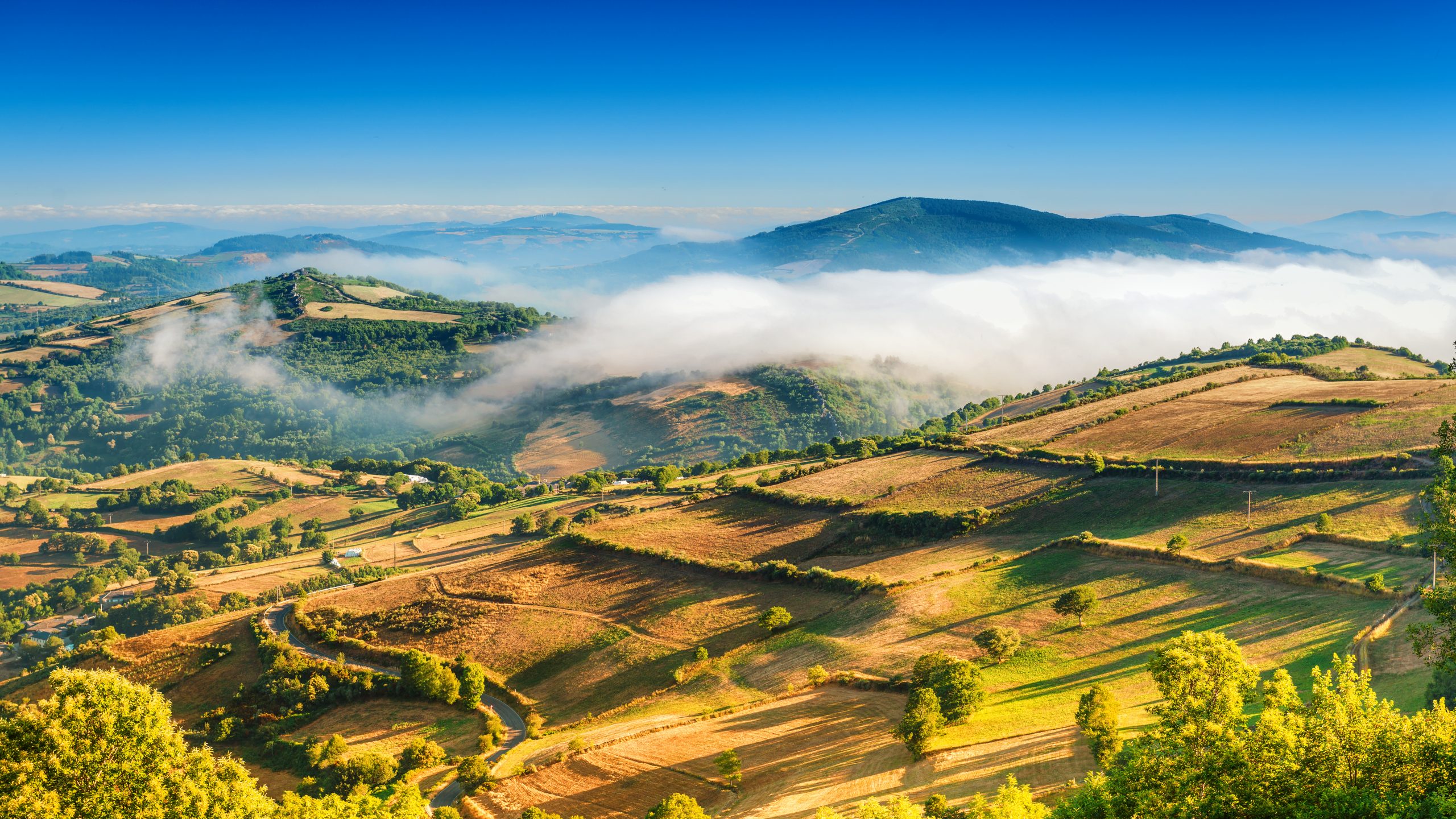 Not many exact data are known about the origin of the place, only that it is a Celtic enclave or settlement. In it, there was an old Pilgrims hospital, probably from the XNUMXth century, of which only the Church of Santa Maria la Real remains.

During the reign of Alfonso VI, a Monastery with the name of San Giraldo de Aurillac, belonging to the order of Cluny, was built, next to the church, for the attention of the pilgrims, which was endowed with important economic resources and privileges for its maintenance. Later, it was run by the monks of the Benedictine Order until the confiscation of Mendizabal (XNUMXth century). It was used as a hostel for pilgrims in the past and today it works as a private hostel.

The heyday of Cebrero and its Pilgrim Hospital was the XNUMXth century, like the other towns on the Camino de Santiago, due to the extraordinary number of pilgrims who, at that time, were heading to Santiago.

In the XNUMXth century, the Catholic Monarchs, on their way to Santiago de Compostela, visited the place and made important donations to the Monastery for its maintenance and conservation.

LEGEND OF THE "MIRACLE OF O CEBREIRO OR EUCHARISTIC MIRACLE"

The Miracle of O Cebreiro and the subsequent legend of the Galician Holy Grail took place in the Benedictine Church of Santa María la Real. Today O Cebreiro is still a small village. Its great treasure is precisely the Church of the Eucharistic miracle, of pre-Romanesque style, from the XNUMXth century, with three simple naves with rectangular apses and a tower. The image of a Gothic Christ presides in the presbytery. It is very important to note that in this Miracle, the Church of Santa Maria is the oldest of all the Jacobean heritage, preserved in its entirety, except for the facade.

The Benedictine monks raised and guarded this temple from the year 836 to 1853, more than a thousand years! The monks of Aurillac, whom Alfonso VI called, remained in O Cebreiro from 1072 to 1487, the date on which the Catholic Monarchs obtained their annexation to San Benito el Real de Valladolid from the Pope. The monks left their place in 1853, as a result of the confiscation of Mendizábal. 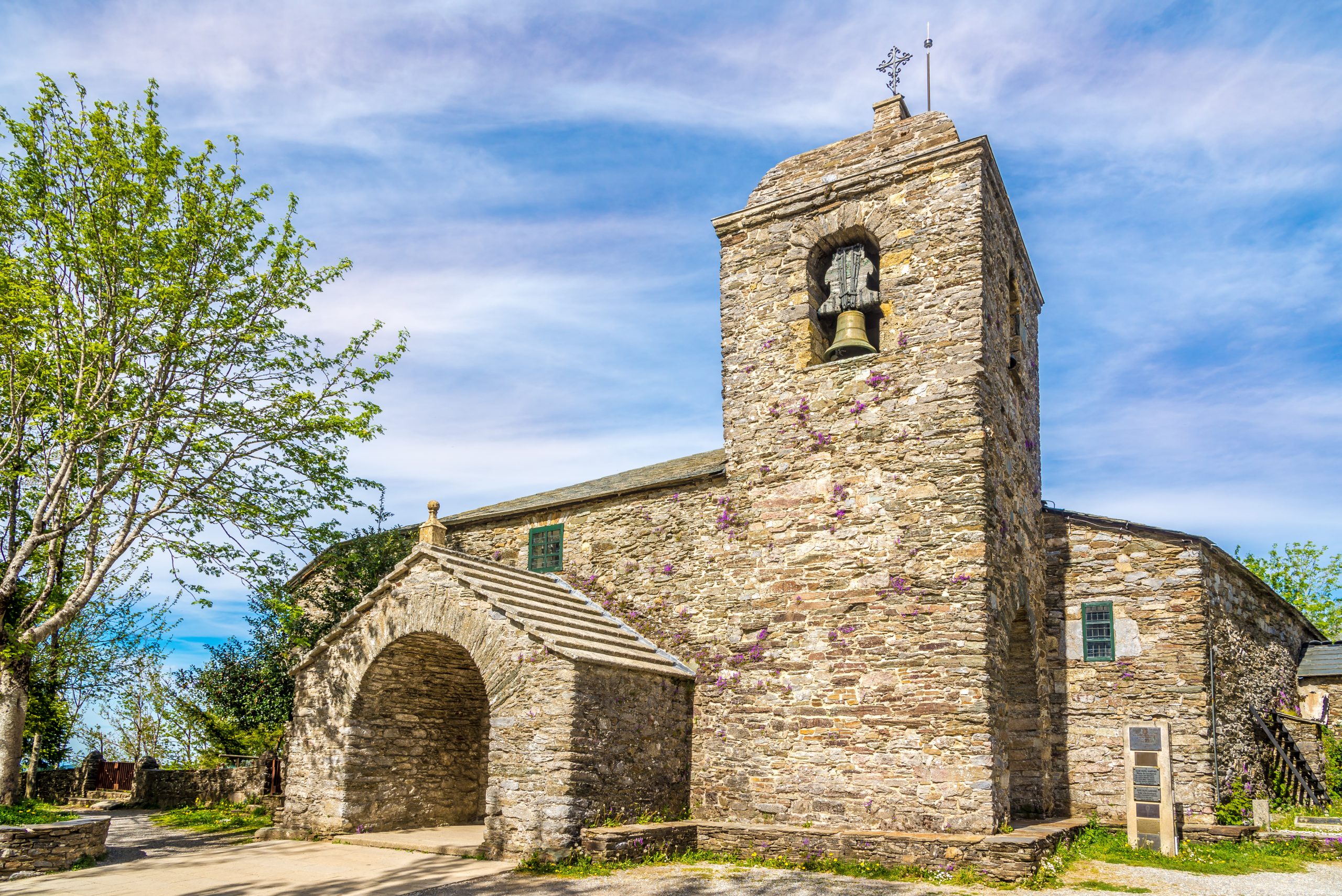 NARRATION OF THE LEGEND

A very strong tradition, corroborated by various historical and archaeological sources, maintains that a Benedictine priest was celebrating the Eucharist on the side chapel of the church of Santa María la Rea. It is believed that this celebration took place around the XNUMXth century.

Legend has it that in the middle of a storm, a neighbor from the nearby town of Barxamaior went to the church to attend mass. In the presence of the believer, the clergyman reproached him for his attendance, apparently because he was the only attendant at Mass and snapped: “What is this other man coming with a great storm and so tired for a little bread and wine! " and said that his presence "had not been worth it"

At the end of these words and, while celebrating the consecration, the miracle of turning the host and the wine into the flesh and blood of the Lord. Once this fact was done, suddenly, the cleric died and the bells began to ring.

Jesus wanted to strengthen not only the faith of that monk but of all men. News of the miracle spread everywhere thus fostering a great devotion to Christ in the Eucharist.

The news of the “miracle” spread rapidly throughout Europe, mainly through French and German pilgrims, a fact that favored the many favors, donations and privileges of all kinds that were granted to the church.

Every year, on September 8 and 9, a massive pilgrimage is held from the nearby town of Piedrafita do Cebreiro to the church of Santa Maria A Real to commemorate this miracle.

Despite time, wars and fires, the miracle comes to our century so lacking in faith, as a powerful sign of truth: Christ is alive, risen, Body, Blood, Soul and Divinity, in the Eucharist.

In 1486 the Catholic Monarchs, on pilgrimage to Santiago de Compostela, stayed with the monks, contemplated the miracle and then donated the reliquary where the Miracle has been kept until today.

In the early years of the seventeenth century, Father Yepes wrote: “Although unworthy, I have seen and adored this holy mystery, I have seen the two blisters in one of them is the blood, which seems barely coagulated, red like that of a kid freshly slaughtered, I have also seen the meat, which is red and dry "

The Chalice and the Paten are famous XNUMXth century Romanesque pieces. This chalice presides over the shield of Galicia. Cebreiro and the Miracle have influenced Wagner's work.

It is estimated that the original church was built in the XNUMXth century, which is why it is considered one of the oldest churches on the Camino de Santiago. It consists of three naves, with a small exterior tower, where the bell is located. Granite and slate building, very austere and simple, supported by thick walls to protect it from the severe inclemencies of the Ancares winter.

In a room, at the entrance to the church, there is a large granite baptismal font (XNUMXth century) where the sacrament of baptism was performed, by immersion, of the newborn.

Inside a glass safe, there is a reliquary, two gold ampoules, where the remains of the "miracle" are kept, given by the Catholic Monarchs and the chalice and paten where it was worked. Under it, there is a precious silver casket.

On the main altar, we can see a copy of a carving of a crucified Christ (XIV century)

We highlight the image of the Romanesque carving (XNUMXth century) of Santa María del Cebreiro - in fact it is called Virgen de los Remedios - and that, according to legend, was inclined to worship the miracle of the transformation into body and blood of the Lord. It is about a seated Virgin with a baby Jesus sitting on her lap. This image has undergone countless restorations throughout its history.

On one of its sides, we can see two very old graves that, apparently, correspond to the clergyman and the neighbor of Barxamaior, protagonists of the "Holy Miracle" 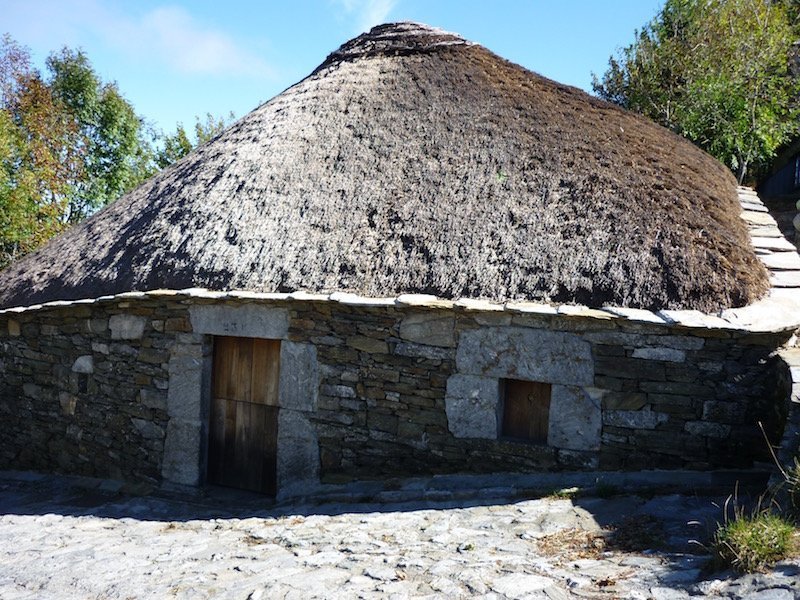 Ethno-anthropological set of pallozas, created in 1971, around the Sanctuary of Santa Maria de O Cebreiro, which represent pre-Romanesque constructions, possibly Celtic, typical of the old forts. The palloza is a unique space that served as a habitat, both for its inhabitants and for their livestock, as well as for storage and farm implements.

Built with thick granite and slate walls, conical or oval in shape, low in height and with a vegetal roof made up of dense straw lattices to mitigate the low winter temperatures typical of the Ancares and suitable to withstand and repel snow and wind. .

You can visit 4 pallozas: Xan López (palloza-museum), Campelo (warehouse) and those of Quico and Galán, where different utensils, furniture, farm implements and spaces used by the ancient inhabitants of this area of ​​Galicia are recreated, related with your everyday life. 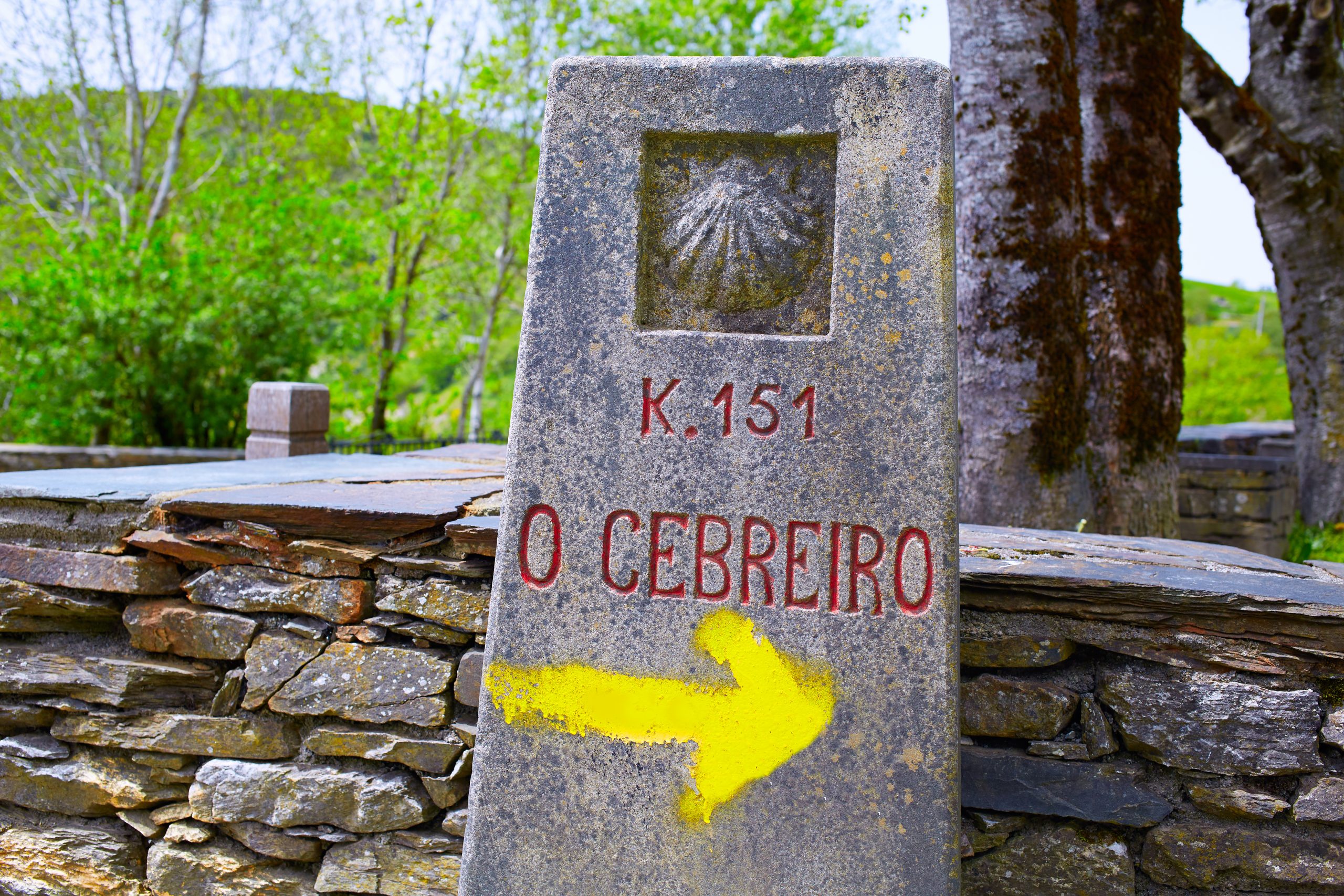 ELIAS VALIÑA AND THE SIGNAGE OF THE CAMINO DE SANTIAGO

In the chapel dedicated to San Benito, there is the tomb of the priest Don Elias Valiña Sampedro, also known worldwide as "the priest of O Cebreiro", who ran the parish since the 60s and who is considered, with total merit , one of the great promoters and capital figure of the "rebirth of the Camino de Santiago", especially since the 80s.

As a daily and permanent reminder of his work, we can observe, along all the Paths, the universal "yellow arrow" with which he popularized the signposting of the French Way, and that was extended to other routes, later, guiding the pilgrims to the Cathedral of Santiago de Compostela.

Outside the Church there is, as a tribute, homage and gratitude to it, a small granite monolith with its bust and different memories of Jacobean organizations and pilgrim associations from all over the world.