The Virxe da Barca Sanctuary, which can be reached by taking the route of the Camino de Santiago to Finisterre / Muxia, is located in the Coruñesa town of Muxia, is linked to the "Supposed appearance", from the Virgin Mary to the Apostle Santiago, when he was in Hispania on a mission of evangelization and spreading the word of God, in the confines of the earth known until then as the “Finis Terrae”, to encourage him and announce that he would return to Jerusalem, although the results of it had not been very satisfactory, apparently.

This "apparition" of the Virgin Mary took place on a Stone Boat, whose remains “appear” and we can see them next to the Sanctuary, in the so-called “Pedra de Abalar” (Boat), “Pedra de Os Cadris” (Sail), Pedras dos Namorados ”and the Pedra de o Temón” (Timon). The belief that was transmitted over time is that these miraculous stones have healing and divinatory properties. 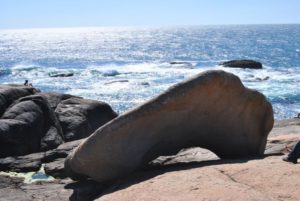 Unfortunately, at Christmas 2013, a fire broke out in the Sanctuary that destroyed practically all of it, including the fabulous Baroque altarpiece that was inside. Today, once rebuilt, we can once again enjoy the Sanctuary for the enjoyment of pilgrims and visitors.

It is worth noting the Pilgrimage that is held every year on the second Sunday in September, not before the 9th or later than September 15, and which brings together thousands of pilgrims.

Likewise, apparently, there was formerly the so-called Fuente da Pel, a place where the pilgrims washed before reaching the Sanctuary, where they arrived through the Camino da Pel, something similar to what the pilgrims did in Lavacolla ( French Way ), before entering the Cathedral of Santiago.

As a curiosity, on an imposing viewpoint, near the Sanctuary there is a sculpture "A Ferida", which recalls the sinking of the ship "Prestige”And that caused a black tide in the area causing significant damage to the ecosystem of the area.