Templars on the Camino de Santiago

Origins of the Templars on the Camino de Santiago


In 1096-1099 the I Crusade is developed, in which Hugo de Payns participates among others.

In the year 1118, the French knight, named Hugo de Payens and the Flemish knight Godofredo de Saint-Adhemar, decided to promote the foundation of a monastic order, whose purpose was the custody of the Pilgrims and the guardianship of the dangerous roads they led to places of pilgrimage. They called it the Order of the Poor Soldiers of Christ.

The humility and poverty of the Templars is evident in the Seal and Symbol used by the Templars: two Knights Templar mounted on a horseback. The seal reflects the collection and transfer of pilgrims who went to Jerusalem.

The Knights Templar, renounced all kinds of personal property, the Order being the Owner of all the Goods.

The Templars, were forbidden to share the horse and the Rules of the Order, stipulated that each Knight Templar should have 3 horses.

Saint Mary of Eunate Probably the most puzzling Templar hermitage, since its origin generates many controversies.

It is in the place where the Paths come together from Somport and the Camino de Santiago from Roncesvalles. The set is octagonal and is surrounded by a porticoed gallery of 33 arches, with decorated capitals. The harmony of the octagonal plan is broken by a pentagonal apse and a square-shaped turret attached to the side of the Epistle.

La Church of the Holy Sepulcher, is the culmination of the perfect octagon of the Templars on the Camino de Santiago. The Church of the Holy Sepulcher of Torres del Río or Sansol, also named after the nearby hill of that name, follows the infrequent octagonal pattern on its plan already seen in that of Eunate. It served as a beacon-guide to guide pilgrims in transit to Santiago de Compostela as well as that of Eunate.

Church of San Juan: In the middle of the Camino de Santiago, rebuilt on a Romanesque base, it belonged to the Templars, who later yielded to the Hospitallers, to carry out their work of helping the Pilgrims. 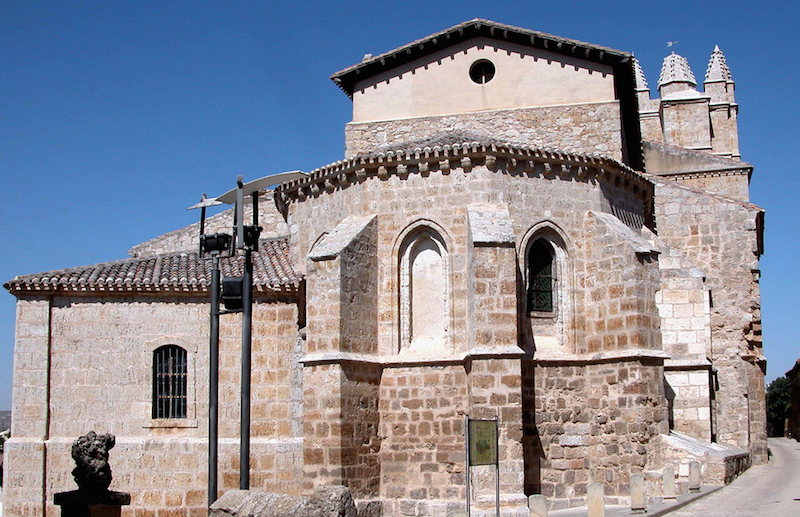 The Church of Santa María la Blanca It was a sanctuary for the devotion of Mary, Mother of Jesus Christ, which had a period of great splendor between the XNUMXth and XNUMXth centuries, due to the protection of the Crown of Castile, among which were the kings Alfonso X the Wise and his son Sancho IV.

Parish church. Small Church, with Romanesque remains that belonged to the Templar Commendation on the Camino de Santiago (Ponferrada)

One of the most important Temple encomiendas in Spain. Ponferrada Castle It was a fundamental enclave of the Templars on the Camino de Santiago, more specifically in the Kingdom of León.

They developed work to protect the Camino de Santiago, then assigning these functions to the Order of Santiago and the Hospitallers.

The encomienda had the Castles of: Cornatel, Corullón, Sarracín (Vega de Valcarce) and perhaps also the Balboa Castle. The disappearance of the Order led to the change of ownership, passing through the hands of the Osorio family and the Count of Lemos. Following the Irmandiña revolt and the struggles between the Count of Lemos and his son, it was claimed by the Catholic Monarchs .

The jurisdiction of the order of the Order of the Temple of Ponferrada, covered, almost the entire Bierzo, extending from Rabanal de Camino to Or Cebreiro. The Bierzo monasteries belonged to the Cister and the O Cebreiro al Cluny Monastery.

El Sarracín Castle, was one of the main enclaves of the Templars on the Camino de Santiago, for the defense of the Pilgrims who were going to Santiago.

En Vega de Valcarce, the Portazgo was charged, which was a payment for a right of way. The pilgrims were exempt, but many times the custom pilgrims could be considered rich merchants and were forced to pay the Portazgo payment. This originated a historical path that runs alongside Sarracin by the mount of the Villela (Villaus of the Codex Calixtinus), obtaining like this the protection against the Portazgueros of the Castle of Autares. There was another alternative way, to avoid the Portazgo, which deviated through the San Fiz valley, and continued towards Villasinde (Villasinde Hospital) and linked in the Vilela with the Historic road. We also continued towards Barjas (see Game of the Goose), accessing O Cebreiro.

Past O Cebreiro, the protection of the pilgrims passed to the Order of Santiago.