El Botafumeiro or Turibulum Magnum, it is a gigantic censer or what in street terminology would be a "smoke caster" that is probably believed to have been made between the XNUMXth or XNUMXth centuries, since the exact date is not certain.

DID SOMETHING SMELL BAD IN THE CATHEDRAL OF SANTIAGO?

It was ordered to be carried out to mitigate the odors accumulated in the Cathedral of Santiago, due to the numerous pilgrims who, once their pilgrimage to Santiago de Compostela was over, stayed to sleep inside. The pilgrims of medieval times wore the same clothes since they started the pilgrimage in their hometown ... Imagine the bad smell! Later the pilgrims made the Way to Finisterre, what was believed to be "the end of the world", and there the tradition was to burn those clothes.

The "perfume" that was used, to alleviate this mail smell, is the incense, which is burned by pieces of coal that are placed inside. This is where the tradition of this magnificent censer comes from.

WHAT IS THE BOTAFUMEIRO USED FOR CURRENTLY?

At present the use of the botafumeiro has changed completely, now it is used to give solemnity to religious celebrations, among them, the celebration of the mass at 12:00, (Pilgrim's Mass) which is the one attended by the greatest number of pilgrims who finish their Way in Santiago, which constitutes one of the great attractions with which the Cathedral of Santiago gives its visitors.

HOW MANY BOTAFUMEIROS DOES THE CATHEDRAL OF SANTIAGO HAVE?

Throughout the history of the Camino de Santiago, the Cathedral of Santiago has had 4 censers. The first of them lasted until 1530, another was built later, but it was stolen by the French in 1809, during the invasion of Spain. The third botafumeiro was used until 1851, having been paid for by King Louis XI of France.

Currently the Cathedral has two botafumeiros, which are kept in the Library; the one that is habitually used in all religious celebrations, is made of silver-plated brass. It measures 1.60 meters and weighs about 62 kg. The other botafumeiro is a replica, which was a gift from the provisional Alfereces in 1971 and which is used in case the previous one is being repaired.

Given the weight and volume of the Botafumeiro, 8 “tiraboleiros” are needed for its operation, by means of a system of ropes and pulleys, producing a “wobble” along the longitudinal transept of the cathedral, which goes from the plaza de la Azabacheria to the Plaza de Platerias.

The sensation that is perceived is that at any moment the ceiling of the Cathedral is going to crash or the rope that supports it will break, a fact that according to history has occurred on two occasions, one of them when Catalina de Aragón, future Queen of England, visited the Cathedral, before getting married, in 1501 and the second, in 1622, but fortunately in both cases, there was no damage. 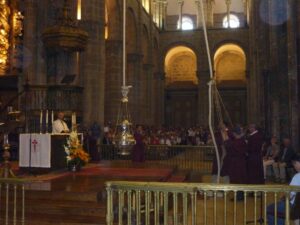 WHAT DAYS CAN THE BOTAFUMEIRO BE SEEN IN OPERATION?

It is put into operation on certain solemn religious dates, in addition to in numerous masses at 12:00 (Pilgrim's Mass), although not in all so if you see it furrow the naves of the Cathedral enjoy that magical and unique moment. There are also dates in the calendar in which if its operation is stipulated as they are special days:

In addition to these dates, it is possible to see it, in operation, in the event that any person or group requests it, on the occasion of a special celebration, such as the end of a pilgrimage to Santiago, in gratitude for this purpose (this request, has an economic cost)

Until 2016, every Friday, at 19:30 p.m. mass, you could also enjoy the “flight” of the incessant, promoted by the Santiago de Compostela Chamber of Commerce.

Due to the restoration works carried out in the Cathedral of Santiago, in recent years, it has not been possible to enjoy the Turibulum Magnum show, but it is planned that it will be available for the commemorative acts of the beginning of the Holy Year 2021 (Translation of the Apostle, on December 30 and liturgy of the opening of the Holy year, on December 31), with which the Cathedral once again has one of the main symbols of the same to the delight of pilgrims and visitors from all over the world orb.