Essential monuments of the French Way

Long gone are the times where the Camino de Santiago was only a religious route. Today, apart from this connotation, it has also become a point of reference for lovers of rural tourism and contact with nature. There are so many roads that lead to Santiago de Compostela that in any case it will always be worth it.

El French WayIn which most medieval routes converge from Saint Jean Pied de Port to Santiago de Compostela, It is one of the most visited by pilgrims. In addition, it offers dozens of attractions from an architectural and sculptural point of view.

Between the essential monuments of the French Way that for no reason should you stop visiting in the itinerary of the Camino de Santiago from Roncesvalles to Logroño:

Located in the north of Navarra, right where the Battle of Roncesvalles, is known as the starting point of the Jacobean route. The beauty of the surroundings and the imposing structure make the place an unforgettable scene.

According to historians, it was precisely at this point that the Celts entered and later it was an obligatory passage between Bordeaux and Astorga.

After the Tomb of the Apostle Santiago was found in 813 and the pilgrimages began, it became necessary to build structures that would house the walkers. This is how in the XNUMXth century the collegiate church of Roncesvalles was built, a hospital - monastery that, later, was completed with the collegiate church.

The Church of Santa María is perhaps the most striking point of the complex. It was built between the XNUMXth and XNUMXth centuries and is considered the best example of the French-influenced Gothic style that can be found on the peninsula.

The oldest building is the Chapel of the Holy Spirit, also known as Charlemagne's Shiloh. According to legend, it was the place where Roldán stuck his sword after the defeat of the Battle of Roncesvalles. Next to it is the Pilgrims' Church, in a primitive Gothic style.

On the other hand, there is the museum - library that has been in operation since the end of the XNUMXth century, with works as old as they are valuable.

Finally there is the Casa Itzandegia, which functioned as a hostel and hospital for pilgrims. 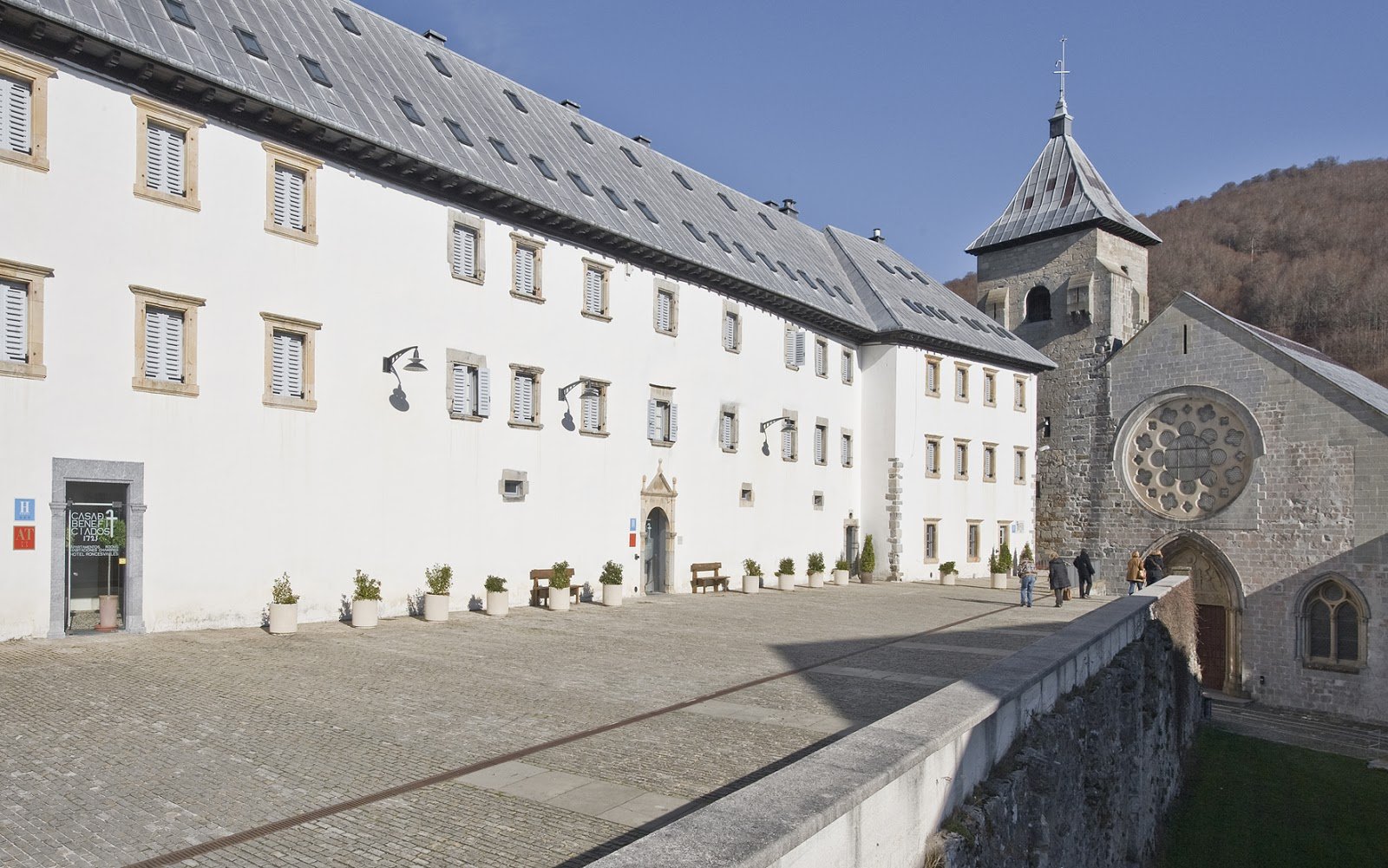 Puente la Reina it is a town of the foral Community of Navarra. Its name comes from the wife of Sancho Garcés III, known as El Mayor, who was king of Navarra between 1005 and 1035. Queen Doña Mayor was the one who ordered the construction of the bridge that it crosses the river Arga with the intention of facilitating the pilgrims' path.

With 5 pillars and 7 semicircular arches, the Puente la Reina Romanesque bridge is considered one of the most beautiful monuments on this entire route. 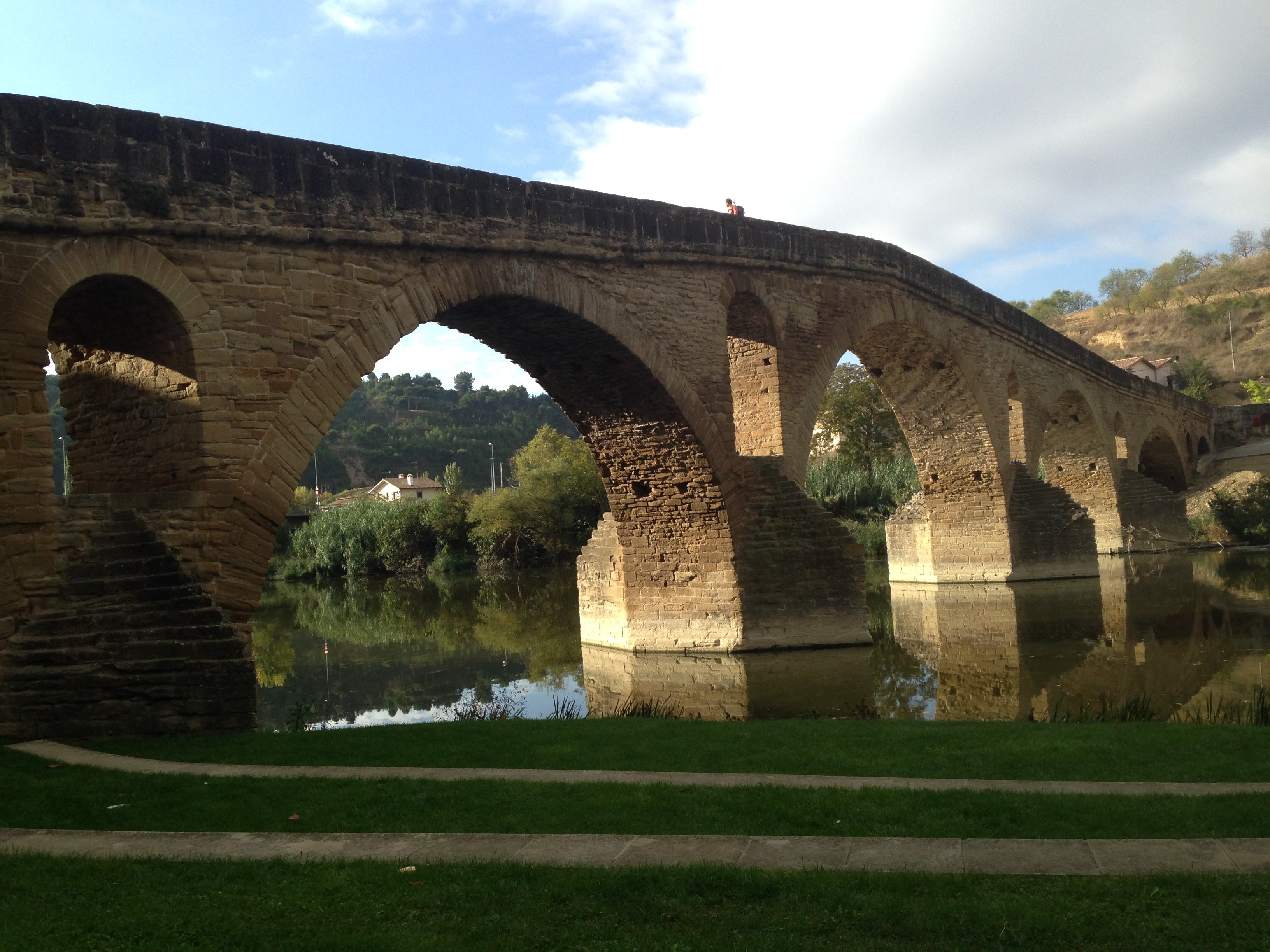 Located before the Puente de la Reina, it is in the middle of an open landscape, about 2 km from the town of Muruzábal. Its floor plan is octagonal and is surrounded by a cloister that makes it even more striking.

There is very little documentation about its origin, although different historians have located its construction towards the middle of the twelfth century, during the reign of Sancho the Wise.

The church of Santa María de Eunate has been given many uses, from lighthouse guide for walkers, pilgrims hospital, dormitory, sanctuary and, of course, place of religious worship.

It is undoubtedly one of the most striking monuments to see on the Camino Frances de Santiago, as it has some resemblance to the Holy Sepulcher of Jerusalem. Furthermore, Eunate means 100 doors in Basque.

According to legend, you have to walk around the Cloister barefoot three times, before entering, in the name of the Holy Trinity. Then you must stop at the North Gate, and ask the sphinxes of the capitals to let you pass. 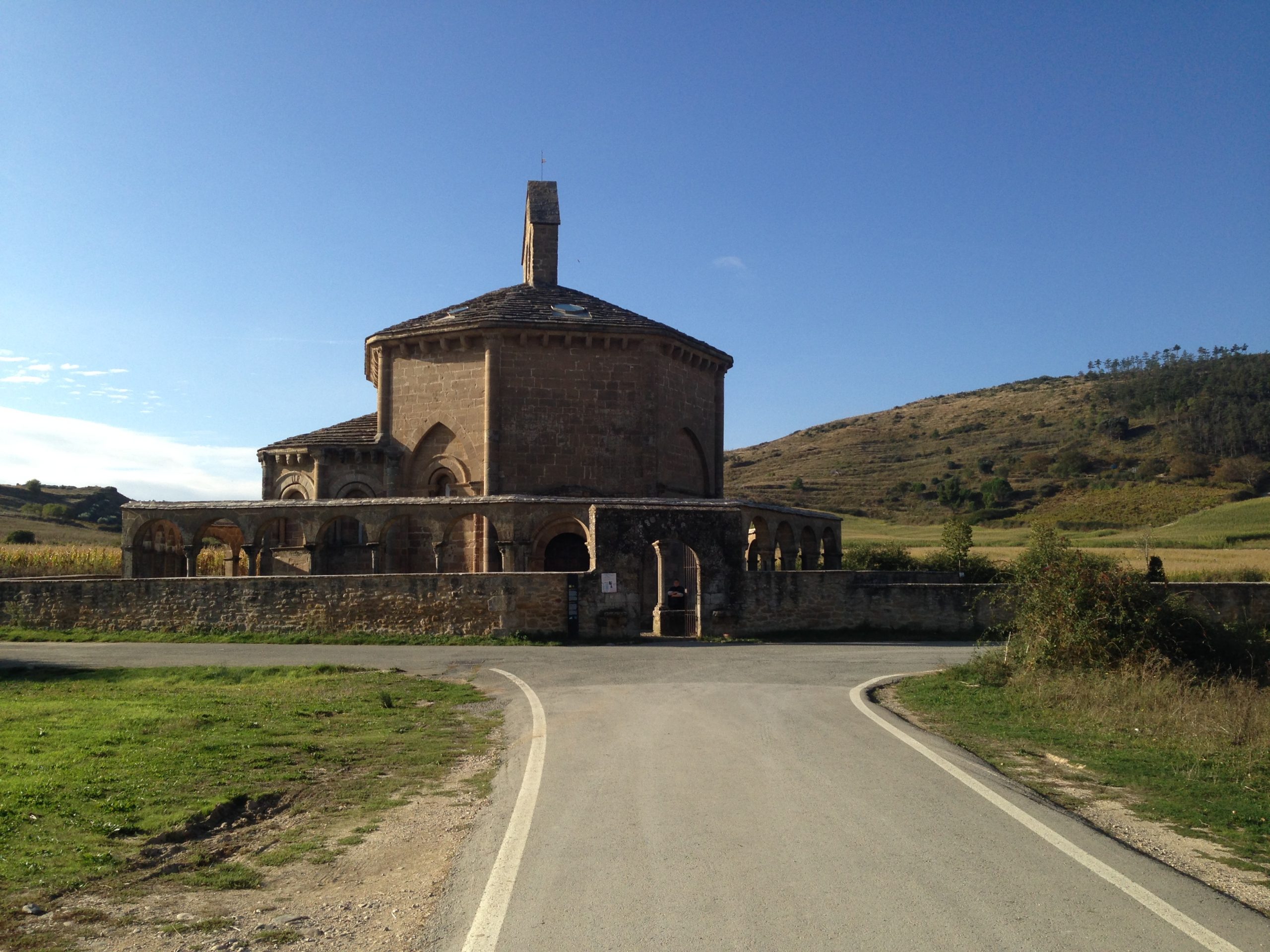 Until the XNUMXth century, San Pedro de la Rúa was known as San Pedro el Mayor, raised on a beautiful staircase. No doubt this It is one of the most emblematic buildings in Estella.

Declared as A CulturalAt first glance, it stands out for the portico with lobed arches that was built in the XNUMXth century that gives way to the tower.

The cloister, on the other hand, it was built around 1170, although it only conserves the west and north gallery. It has simple semicircular arches, inside which is the chapel of San Andrés, inside which there are different relics of great importance for Christianity. 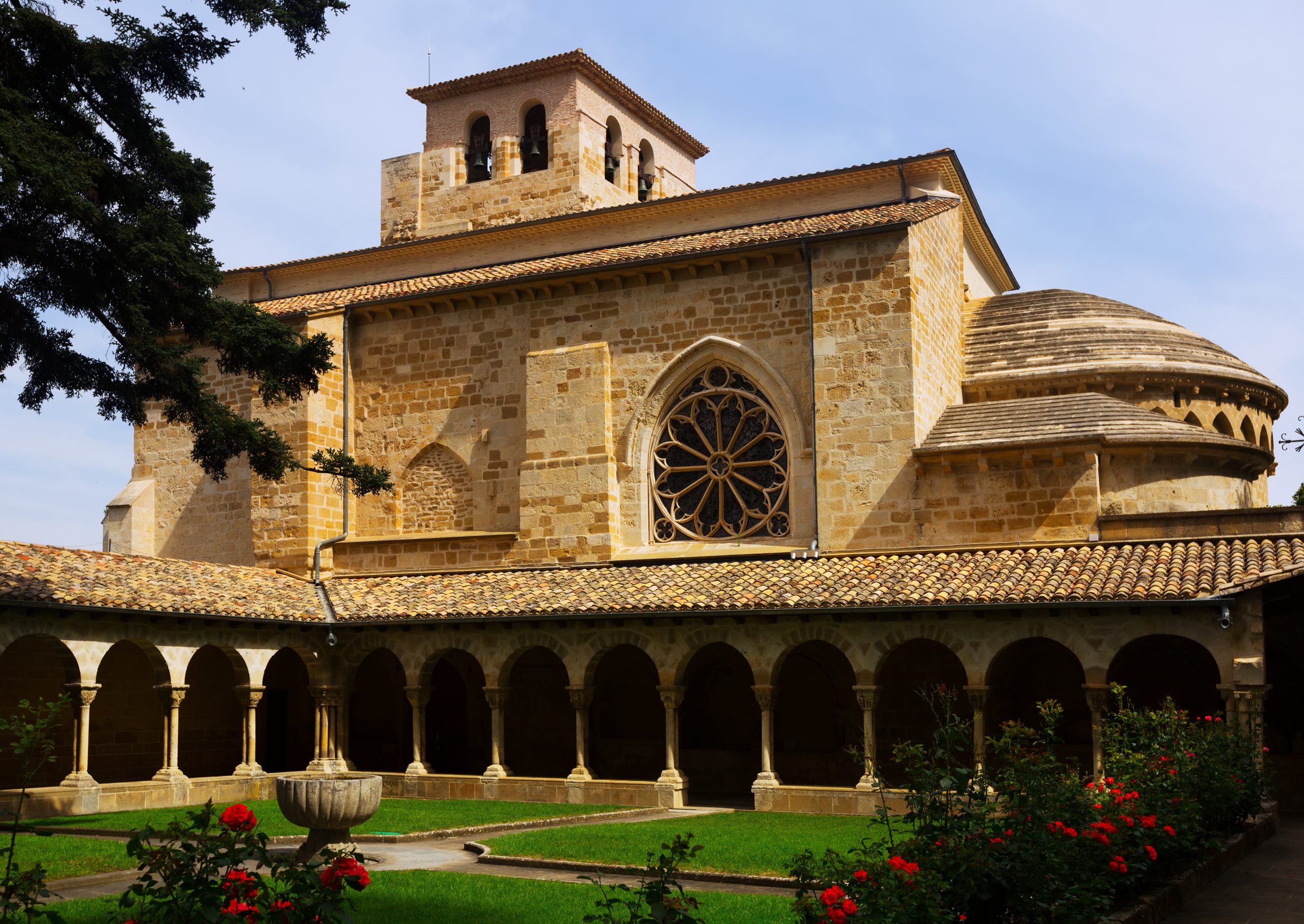 We continue our pilgrimage of the essential monuments of the French Way with the second section of Camino de Santiago from Logroño to Burgos:

This monastery It was declared a National Historic-Artistic Monument since 1889, and is another essential on our trip to the Camino de Santiago. 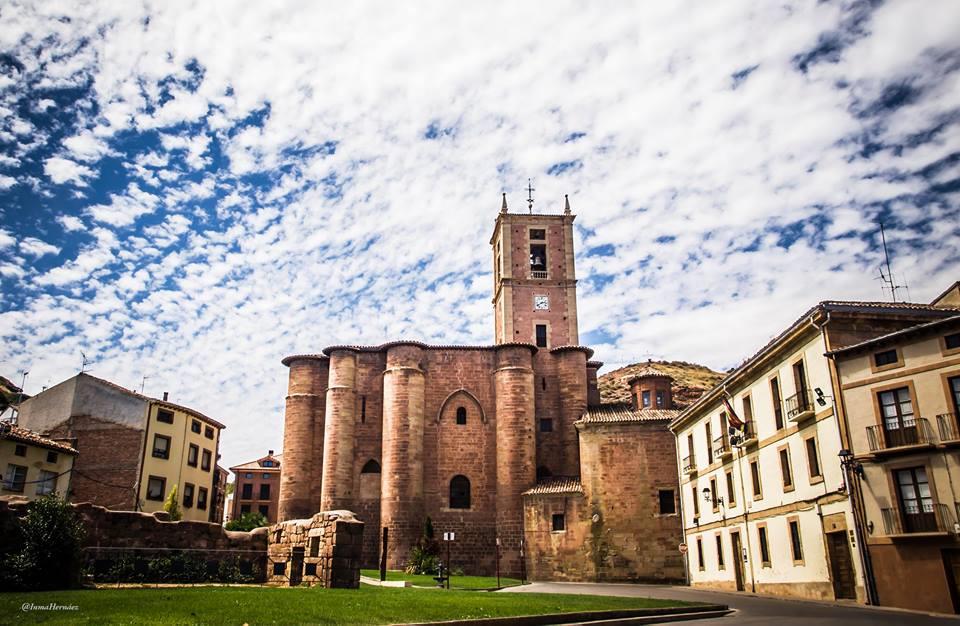 The Monastery of San Juan de Ortega has more than 800 years dedicated to serving pilgrims. It was promoted by San Juan Ortega, who initially built a hospital, then a pharmacy and finally a church. It is believed that it was at the end of his life when he gave birth to the temple project, in the middle of the XNUMXth century.

From the original Romanesque style project that consisted of 3 naves, a transept and three chapels, only the transept could be raised. In the middle of the XV century it was expanded with a section of naves, under a gothic tendency, with high choir and vaulting.

The Romanesque capitals also stand out, as well as the tombs that at the time served to confuse possible looters.

Considered as one of the most emblematic works of the Gothic style in Spain, la Burgos cathedral It was built at the end of the XNUMXth century to replace a Romanesque-type church that was located right in this place.

Here it is possible to enjoy 2 well differentiated styles: the classic Gothic and the flamboyant. Although its plan is of the Latin cross type, the construction it had to wait until the XNUMXth century for its most striking elements to be added, the first dome and the openwork spiers.

In 1885 the building was declared a National Monument, opportunity that served to restore it, after the French plundered it during the war of independence.

Do not forget to visit inside the Cathedral the tomb of the Cid Campeador and his wife Doña Jimena. 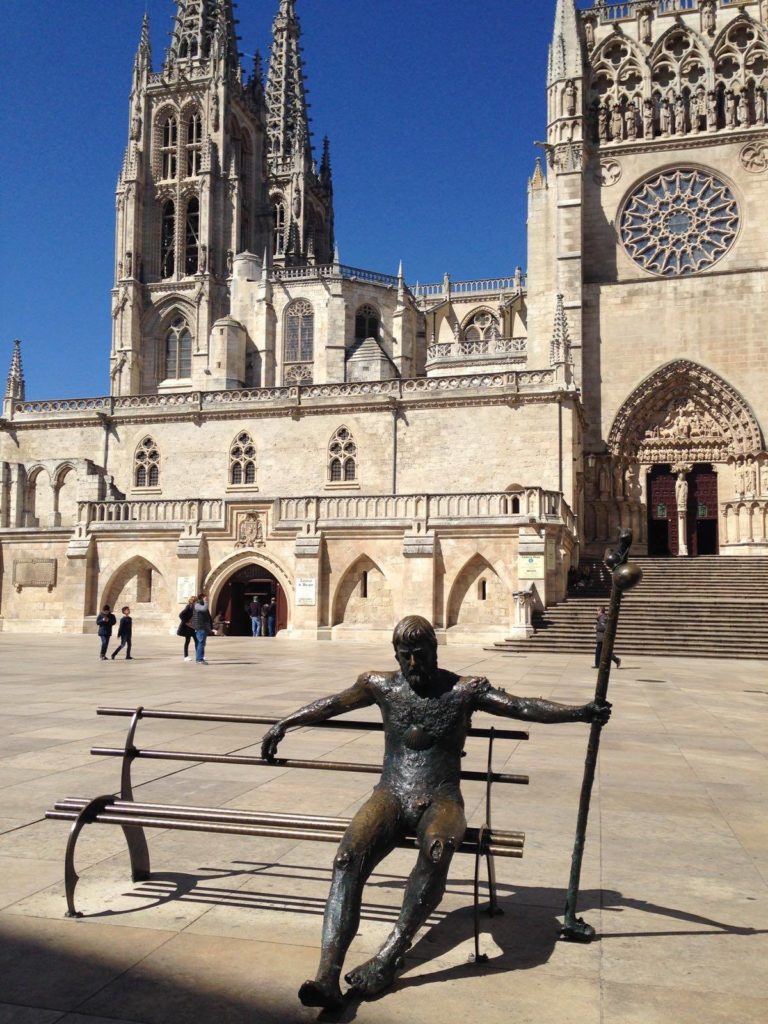 In the section of the French Way from Burgos to León we mainly highlight:

The Church of San Martín de Frómista was built in 1083. Although it was originally a monastery, today only the temple remains. It is directly related to other essential monuments on the French Way, such as the Collegiate Church of San Isidoro de León (together with its Sistine Chapel) and the Cathedral of Jaca.

A tower just above the transept was added to the original work in the XNUMXth century, as well as another one with access attached to the head of the previous one. In 1894 it was declared a National Monument, reason why at that time different reforms and restorations were carried out.

It has 3 semicircular naves, in addition to a kind of octagonal dome located in the transept known as the dome. On the outside are the 2 cylindrical towers. 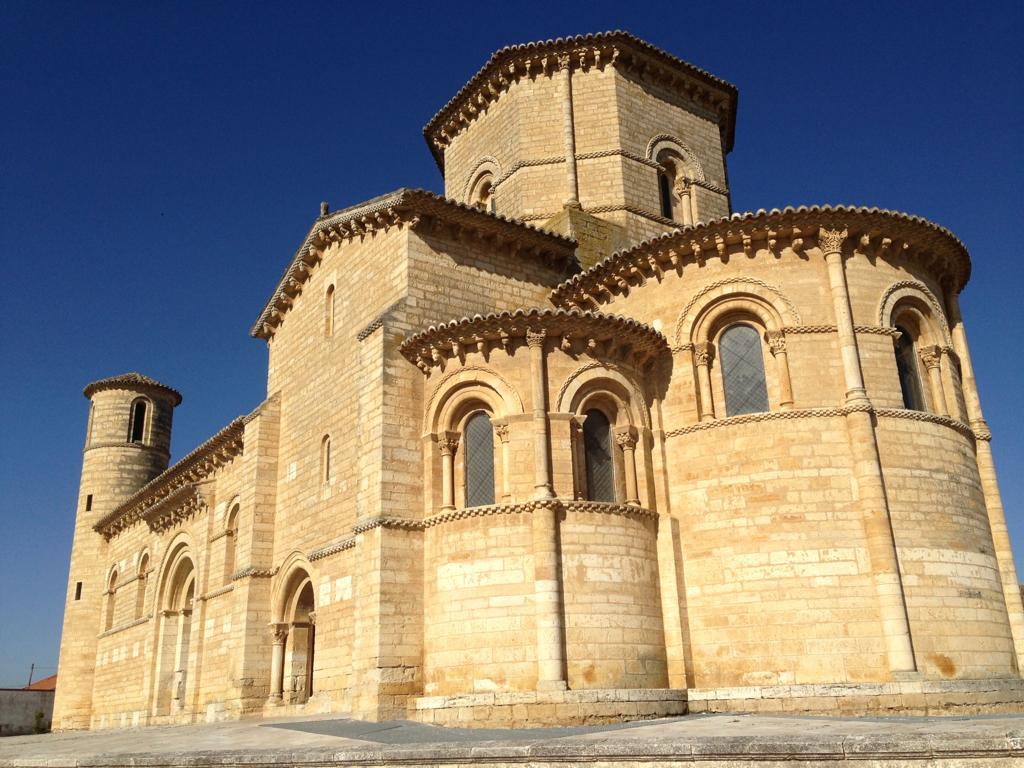 Now we are heading to the essential monuments of the French Way from León to O Cebreiro:

Due to its length and importance, it deserves its own chapter that you can follow here 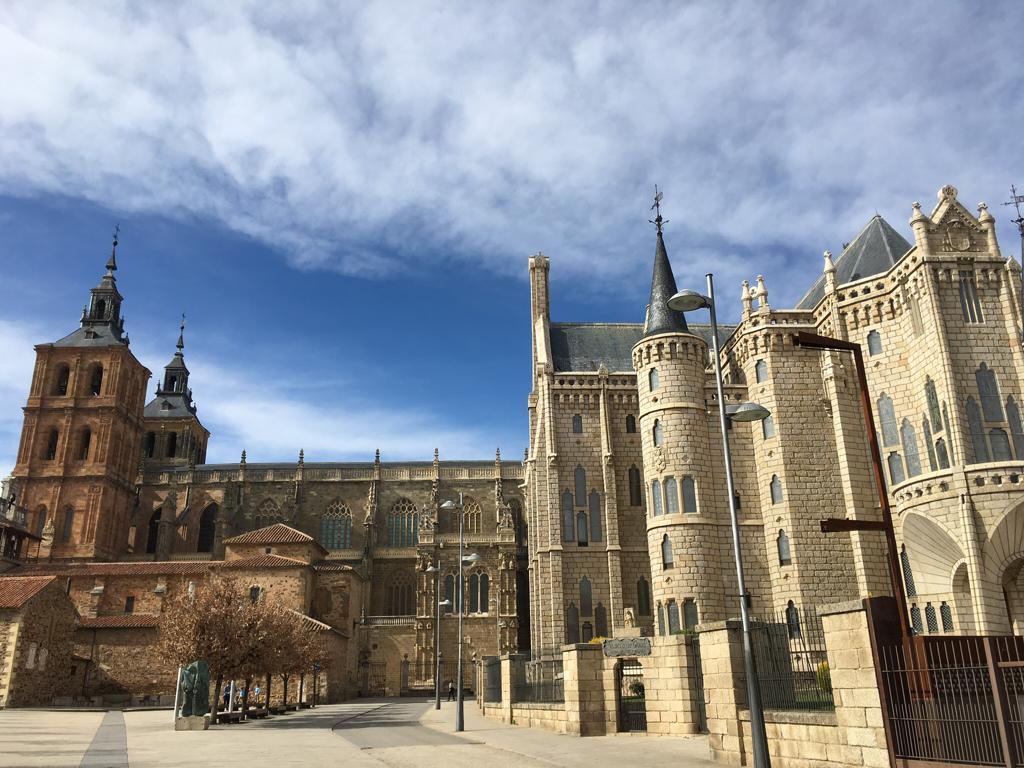 Considered the most beautiful monument and one of the most striking to see on the Camino de Santiago Frances, The Episcopal Palace of Astorga dates back to 1887, under the orders of Joan Baptista Grau, who served as bishop of the city and was in charge of requesting the commission from his countryman, the architect Antoni Gaudí.

The works began in 1989. After Grau's death in 1893, Gaudí was withdrawn from the project, so all the work was paralyzed, being resumed in the early years of the 1915th century under the direction of Ricardo García to finish in XNUMX.

It has a Greek cross plan and cylindrical towers in the corners. One of the most striking elements of the place is the moat, designed by Gaudí to give the basement some natural light. The entrance portico has 3 arches, which, according to some, are inspired by the Eiffel Tower.

Gaudí's ingenuity can be seen everywhere, especially in the pointed arches, as well as the capitals, the basement and the chapel. Without a doubt, a mandatory stop on this route.

Find the model you want in Camino de Santiago from O Cebreiro to Santiago we find 2 essential monuments of the French Way:

Both monuments are the most important since we started the stage on the Camino in Roncesvalles, with a total route of 790 kilometers, by themselves they are worth the whole trip. 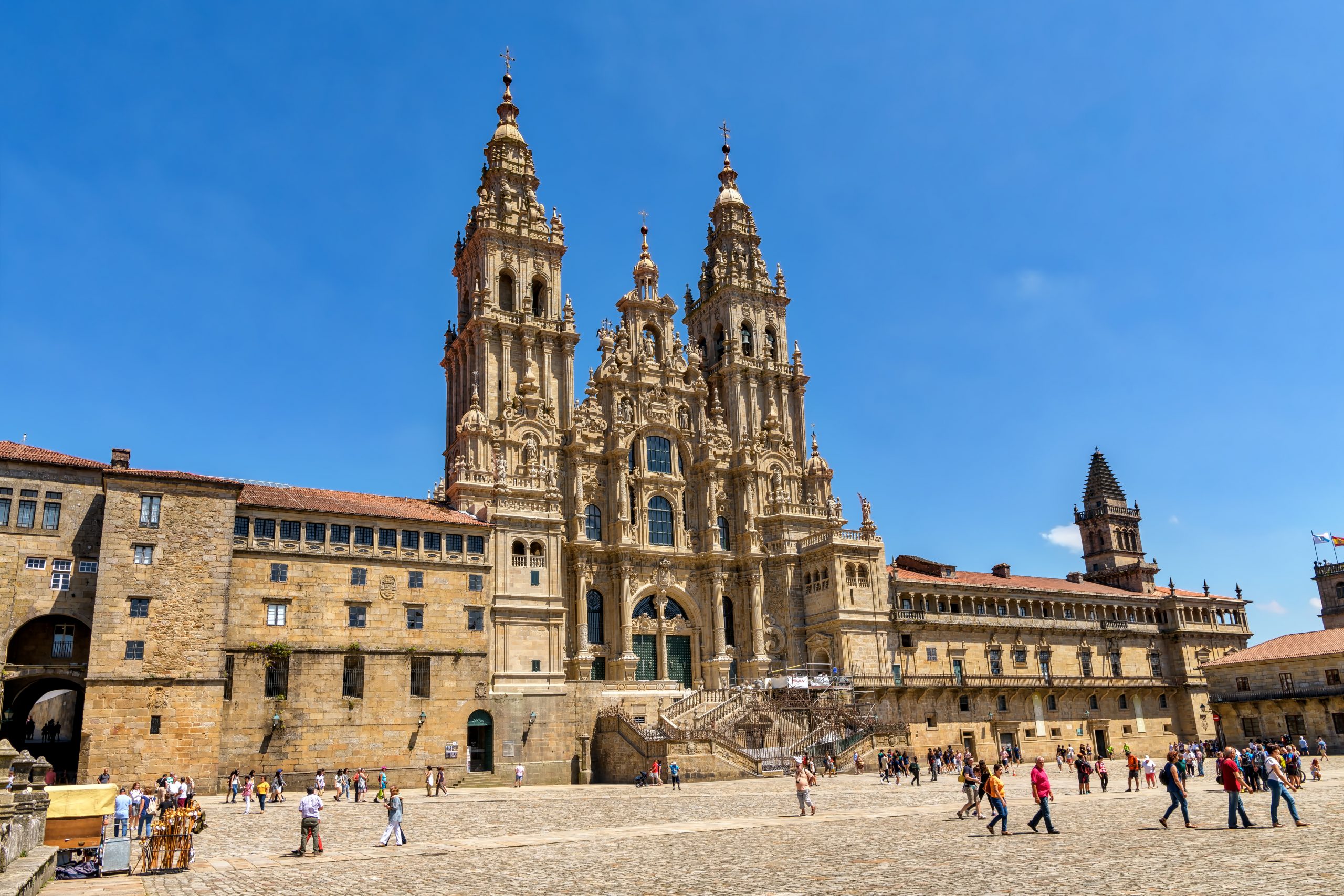