The Pórtico de la Gloria de la Cathedral of Santiago de Compostela It is the maximum expression of Romanesque art in Spain and worldwide, built in marble and granite.

WHAT IS THE PÓRTICO DE LA GLORIA?

Be impressed! It is not just a decorative ornament (although the photos you take give a good account of it), but it is also a visual documentary of the entire Bible. It is a representation of the History of Salvation, that is why the main passages of the Old and New Testaments are sculpted. The summit is in Jesus Christ, located in the center, the only mediator between us and the Father, who gives way to the just to be part of the heavenly Glory. Under the lord is the Apostle Santiago, thus indicating that he is the receiver of the Messiah's teachings and is also the transmitter of his message.

It was designed by its author in order for the pilgrim to understand, at the end of his trip, the meaning of his pilgrimage and of his life. Believer or not, we invite you to go through each statue unraveling its meaning. This will not be a waste of time but the culmination of the kilometers traveled, regardless of the route taken: French Way, Portuguese Way, English Way, Northern Way, Portuguese Coastal Way y Primitive way.

All roads reach Rome, but they also reach Santiago de Compostela, it is time to enjoy the Galician capital and its imposing Cathedral!

The Middle Ages rehearse the animation of figures in the city of Santiago. Medieval symbolism is realized here through a sculptural ensemble in which the figures speak, sing and constitute a true mystical and religious atmosphere. Its author is the Master Mateo, architect of Fernando ll de León, who knew how to put a dense theological message in stone. Work closely linked to history of the Camino de Santiago. 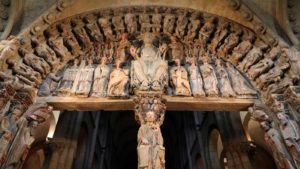 WHERE IS THE PÓRTICO DE LA GLORIA AND WHO MADE IT?

It is located at the Western entrance, which is the main one of the Cathedral of Santiago.

Work done by the Master Mateo and his disciples at the end of the 1168th century, it is believed that from 1188 to XNUMX. It consists of three arches, the central one being the main one, which is divided by a mullion and represents the Jessé tree (family tree of Jesus Christ)

ELEMENTS THAT MAKE UP THE PORCH

The main elements of this mullion stand out, in its front part, the Capital representing the Trinity, the figure of the Apostle Santiago, in a seated attitude and another capital, representing the temptations of Christ.

In the back of that mullion, is the kneeling figure that, apparently, represents the Master Mateo, looking inside the temple, in an attitude of submission and humility. Legend has it that this figure was in the front part of the portico, but before the archbishop's anger, forced him to move it to its current location; other versions believe that it was Master Mateo himself who appears in such a position as thanksgiving.

In Tympanum of the Main ArchIn the central part, there is a "Christ in Majesty" (with open arms and palms in front). On both sides, are the 4 Evangelists (San Marcos, San Mateo, San Lucas and San Juan), accompanied by their symbolic representation (León, Caja de tax, Toro and Aguila, respectively). Along with the evangelists, there are, in the upper left, the people of Israel and in the right part of the non-sinful people.

Here at the top of Arch from the portico of Glory, are the 24 Elders of the Apocalypse, with their musical instruments.

The current Portico de la Gloria is not entirely original, as some of its original figures were removed when the current Obradoiro façade was built, and it can be visited in the Cathedral Museum.

The original portico was polychrome in its entirety, until 2020 only remains of the painting remained in some points, but a great restoration of both the Cathedral and its Portico has returned it to the spectacularity of other times. 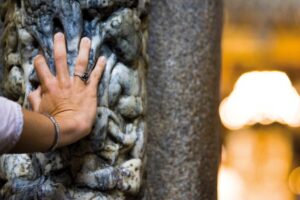 TRADITION PROHIBITED WHEN YOU ARRIVE AT THE PÓRTICO DE LA GLORIA?

Traditionally, pilgrims on arrival in Santiago de Compostela and when entering through El Pórtico placed their hand in a cavity already deformed by so many pilgrims throughout history. This gesture symbolized that you wanted to become part of the followers of Jesus. Currently such a gesture cannot be performed for conservation reasons.

Behind the mullion is the figure of the Holy two croques (Saint of the blows), tradition says that it is the same master Mateo, architect of the basilica and sculptor of the portico. The inhabitants of Santiago, and especially the students of Compostela, tap their heads three times to ask for wisdom and understanding. This custom continued to be maintained until 2007, as the entire sculptural ensemble was protected in order to prevent the deterioration of the entire work.

Likewise, among the pilgrims, there was a tradition of touching the mullion with the hand on a specific part of the column, a fact that caused the serious wear of the column, clearly observing the hollow and figure of a hand.

Recently, in 2018, the Portico of Glory, after being closed to the public for 10 years, due to a thorough comprehensive restoration of the entire architectural complex of the Cathedral of Santiago, having returned to this universal wonder all the polychrome from another era.